In this post I'll share a few test shots taken with a selection of my lenses from 27mm - 50mm. The goal of this test is simply to see which lenses pass enough UV light to make them usable for reflected ultraviolet photography. 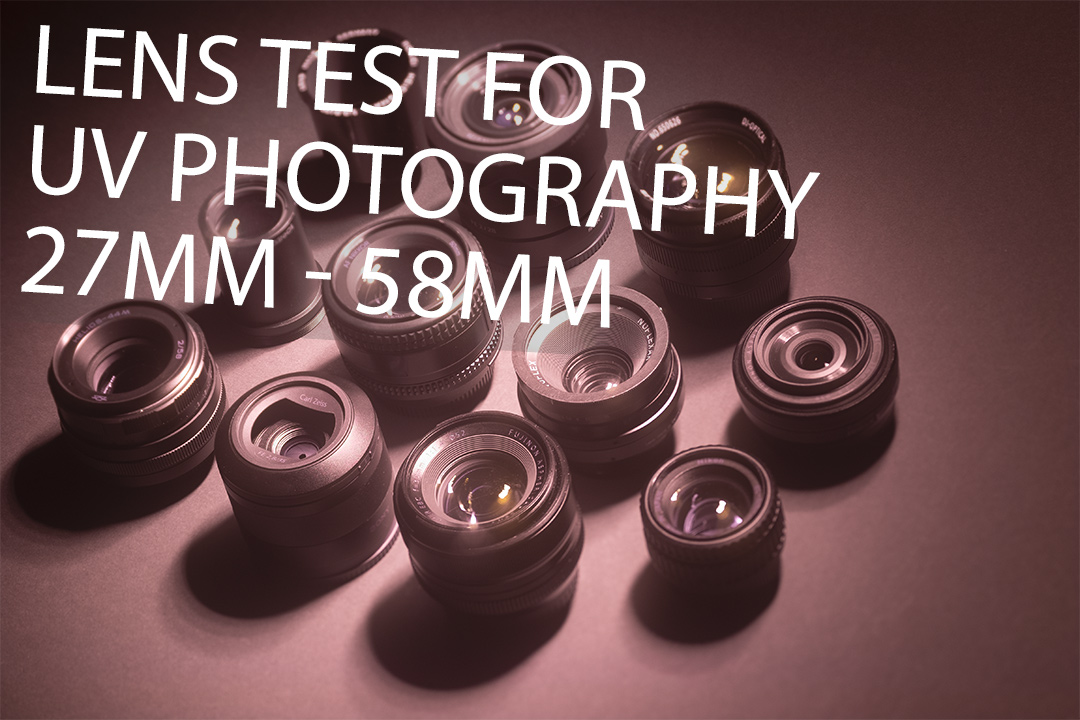 In my previous test I looked at UV and IR transmission, hotspots, and focus shift. This post is quite a bit more basic, not covering IR at all, and not looking at focus shift either.

All photos were taken with a full spectrum modified Fuji X-M1 (APS-C sensor) camera. The camera was set to ISO800 and all lenses tested were stopped down to f/5.6 (except where otherwise stated). The scene was lit by 2 full spectrum modified Vivitar 283 flashes, one either side, approx 50cm away from the flowers, and both firing at full power. A Baader U filter was mounted on the lens to restrict the light to UV only. 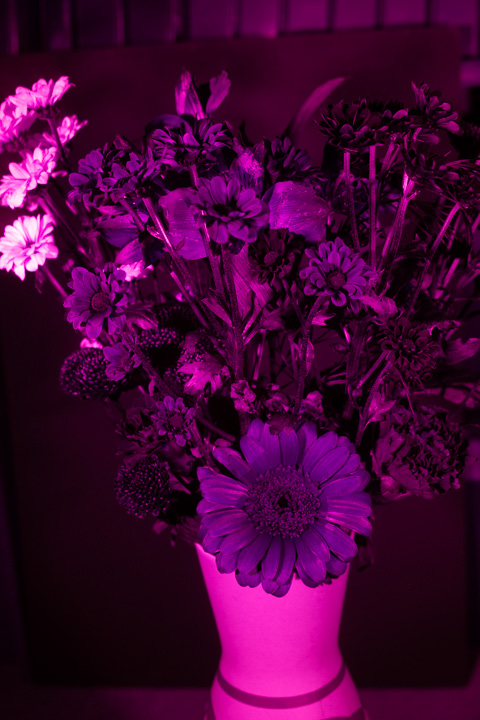 As I mentioned in the previous test, the Fuji 27mm is pretty good for UV photography in terms of a modern lens. No, it's not as good as some more specialist lenses, but it's not too expensive, is nice and small, has autofocus and auto stop-down, and is nice and sharp. 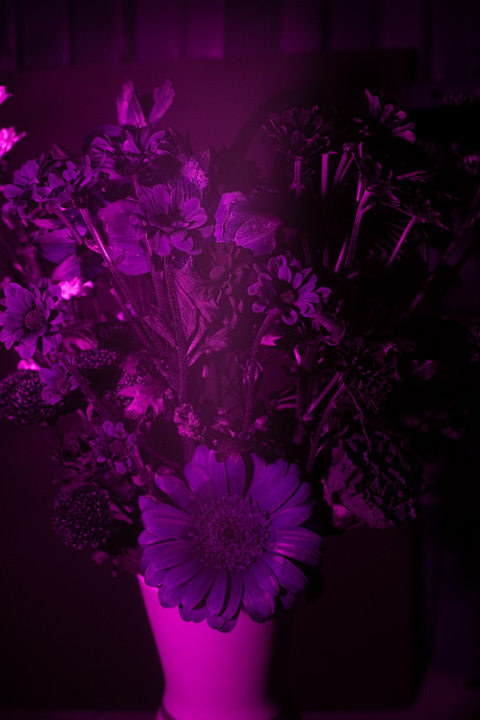 I don't have a full spectrum converted Sony camera (yet!) but I thought I could give my Sony lenses a rough test by just holding them against the Fuji mount. Of course, this meant there was no way of focusing them (I pre-stopped them down to f/5.6 on the Sony body though). The Sony 28mm f/2 shown here looks quite reasonable. But having said that, it is difficult to be sure how much UV the lens is passing, as the frame is lightened by a bit of flare. 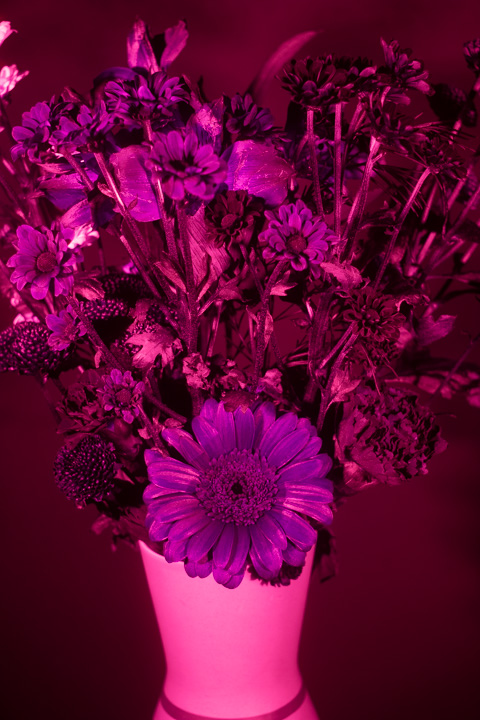 The Novoflex 35mm f/3.5 is a known good-for-UV lens. And we can see it gives a nice bright image. 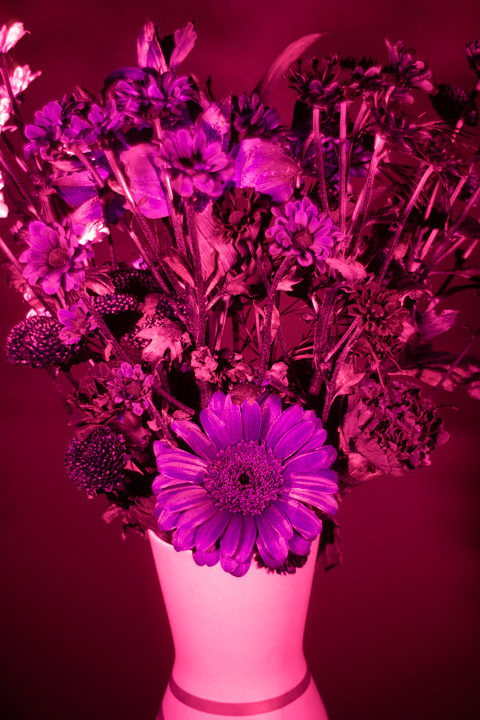 The Petri 35mm f/3.5 is another lens already well known for its UV performance. 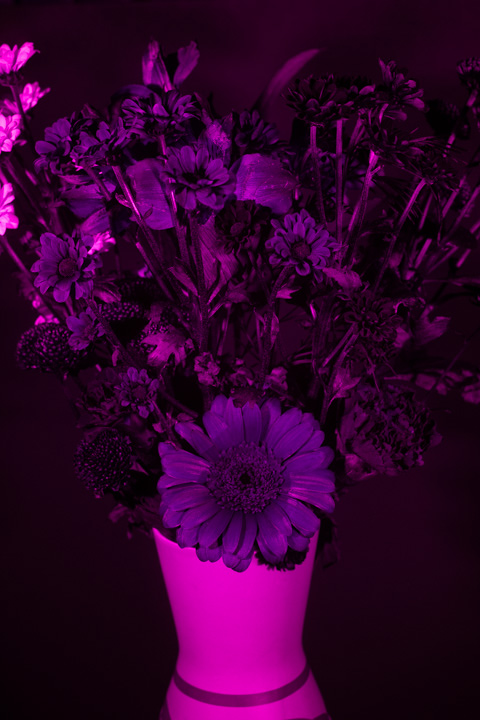 The Fuji 35mm f/1.4 gives a much darker image than the previous two 35mm lenses. However, it's still a useable image. 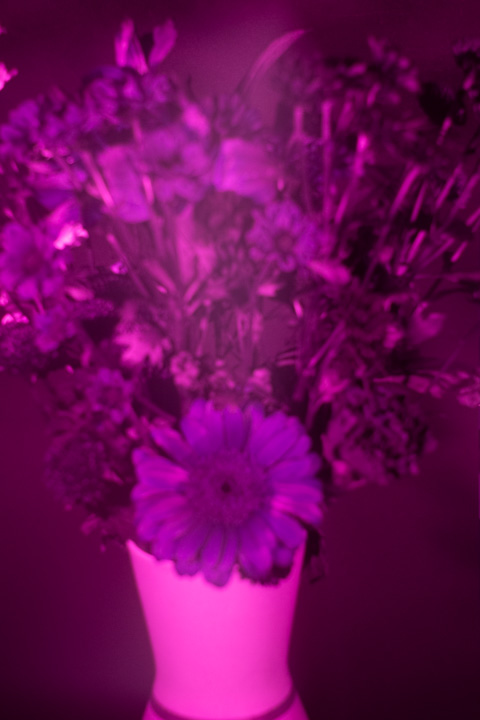 Another Sony lens, so again it had to be just held against the camera mount and could not be focused. The 35mm f/2.8 looks better than the 28mm did, but again we can't draw any definite conclusions from a flarey image like this. 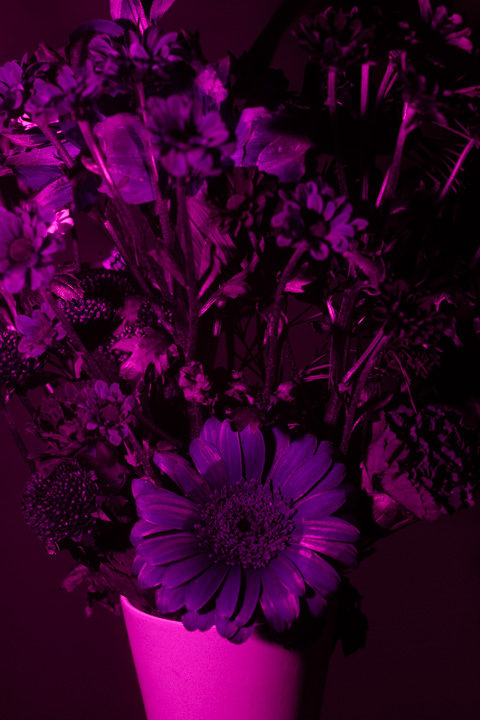 The EL-Nikkor 50mm f/2.8 N is a lens I quite often use for UV photography, though as you can see from the image here it doesn't actually pass a massive amount of UV. It's certainly good enough for me though. It should also be noted that the right flash didn't fire (or at least didn't fully discharge) for this image, making it darker (though not a great deal darker). Unfortunately I didn't notice this at the time of the test. 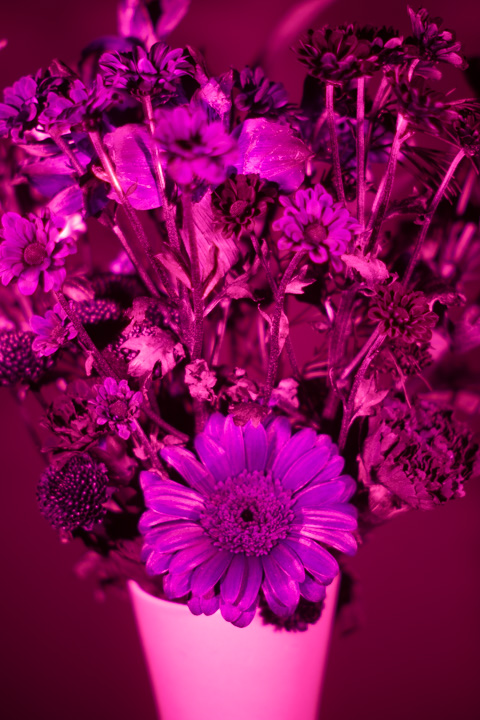 The Schneider Kreuznach Super Cinelux 50mm f/2 is a projector lens. As this lens has no aperture mechanism, it was shot at f/2 and the ISO reduced to 200. This gives it a 1 stop advantage over the other lenses, but taking this into account the result it pretty good. Not sure how useful being stuck with an f/2 aperture is though. 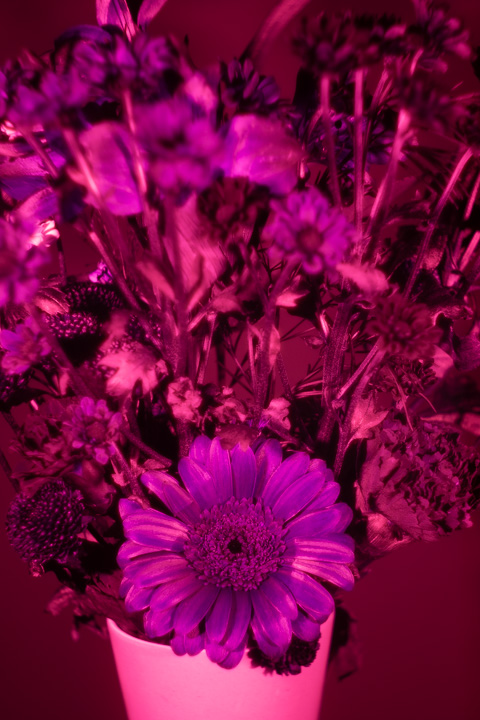 Another projector lens, this one is the Rollei Heidosmat 50mm f/2.8. Again, shot wide-open at ISO 200 due to the inability to stop the lens down. And another good result (in terms of amount of UV transmitted). 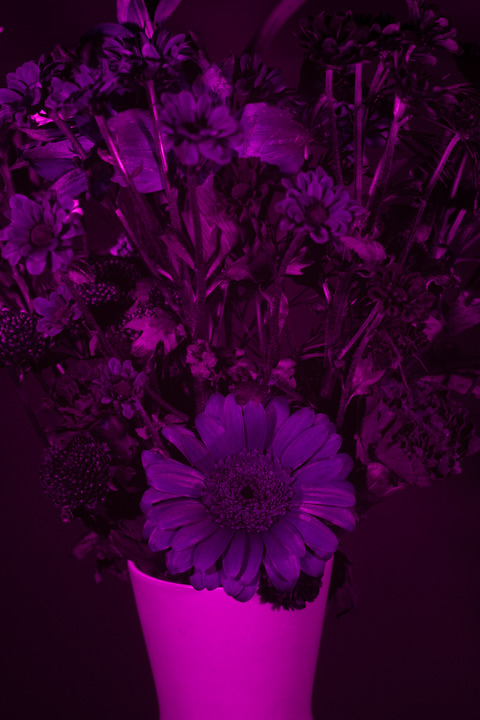 While darker than the projector lens images, this photo from the Nikon 50mm f/1.4 D lens is still quite reasonable. 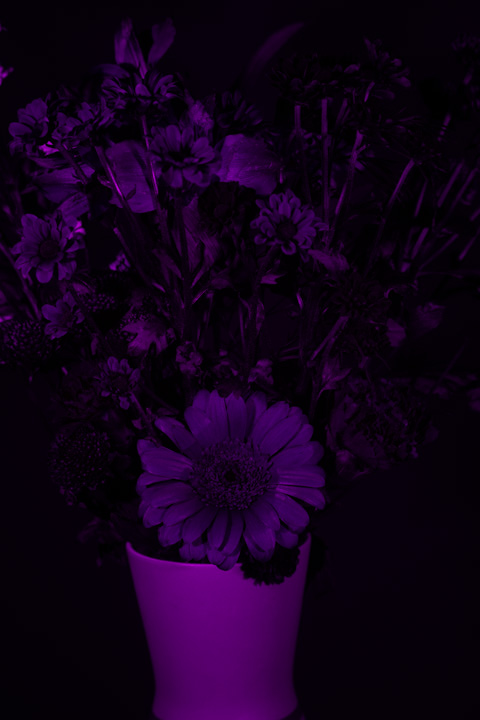 The 7artisans 50mm f/1.1 lens is a big and heavy chunk of glass. So it's not too surprising that the UV performance is quite poor. (Generally the less glass the better the UV performance, but of course coatings play a large part as well). I had to shift the camera back from the other shots as the minimum focus of this lens is much longer and I don't have a Leica M helicoid adapter. 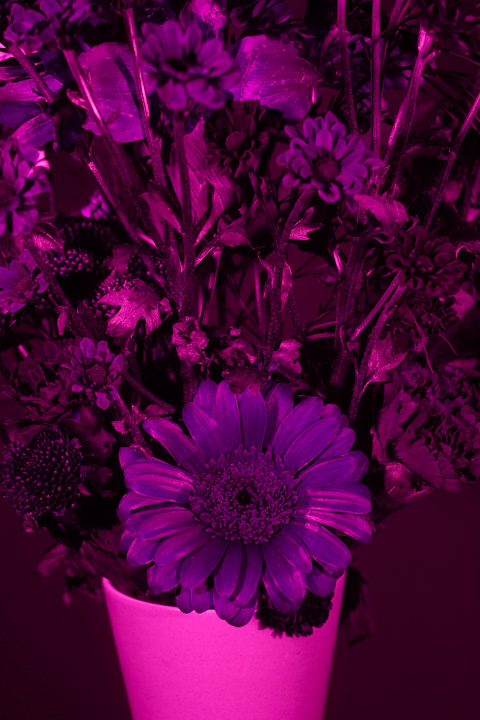 Finally, the Helios 58mm. Quite surprsingly, this gives a pretty decent result.

Hopefully in a future post I'll be able to share a similar test with lenses 60mm and up, but I haven't performed that test yet. And being able to test the Sony lenses on a Sony body would be great if anyone wants to send me donations to go towards a converted Sony camera 😉

Tags: UV Photography
Posted in Reviews and info | 1 Comment »
This post: Lens test for UV photography 27mm – 58mm
Last updated 2018/06/09 by Dave Kennard
You can follow any responses to this entry through the RSS 2.0 feed.
You can skip to the end and leave a response. Pinging is currently not allowed.

One Response to Lens test for UV photography 27mm – 58mm