This post is part of a series on my visit to Seoraksan National Park on the fiftth day of my Holiday in Seoul, Korea. If you haven't read the first part, that's here: Korea day 5 part 1 - Route 7 through Sonyang-myeon.

Carrying on along the National Route 7 Highway, we come to Ganghyeon-myeon (Hangeul: 강현면; Hanja: 降峴面), and Jucheong-ri (Hangeul: 주청리; Hanja: 酒廳里). (If you're confused by the -myeons, -ris, and -eups, Wikipedia has a good article explaining the administrative divisions of South Korea). 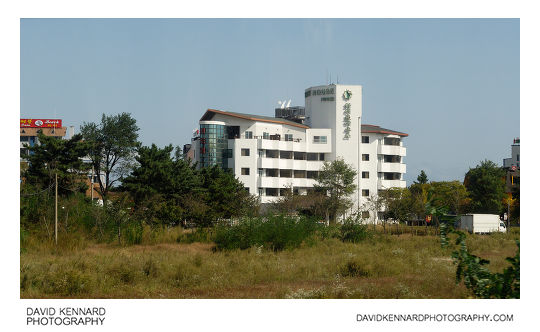 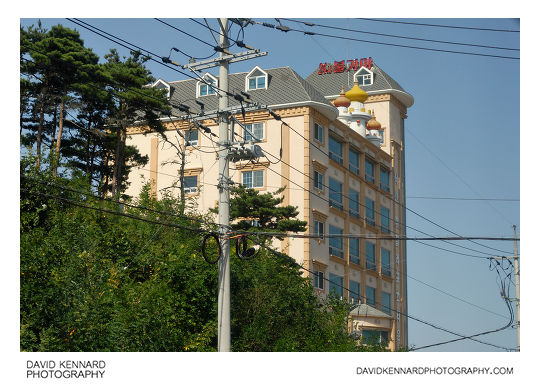 Above is another hotel, this one located in Yongho-ri (Hangeul: 용호리; Hanja: 龍湖里). On top of the hotel it has some onion domes, I'm not sure of the relevance, but I also saw a hotel in the nearby town of Sokcho with the same style of domes on top (photo to come in a later post).

I'm not exactly sure what the hotel's name is either, down the side of the building it says 낙산찜질레포츠타운, which Google Translate translates to Naksan foment leisure town. 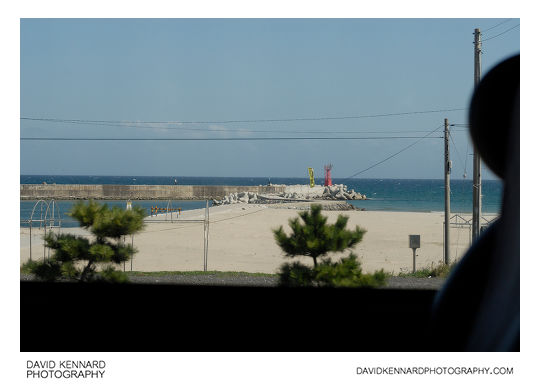 The shot above is looking east, from my seat on the opposite side of the bus. Here you can see a dock and the Sea of Japan, or East Sea as some Koreans prefer to call it. 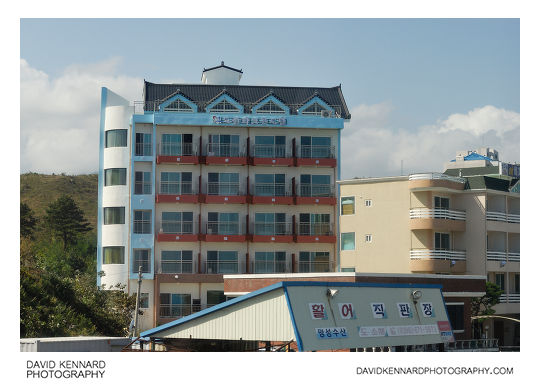 The Ocean Park Hotel (오션파크콘도텔), above, in Jeongam-ri (Hangeul: 정암리; Hanja: 釘岩里). To the right and in front of it is the OK Beach House (ok비치하우스). As you can imagine, the coastal towns have quite a few hotels.

Tags: Ganghyeon-myeon, Gangwon-do, Jeongam-ri, Jucheong-ri, Korea, National Route 7 (Korea), Yangyang-gun, Yongho-ri
Posted in Photos | No Comments »
This post: Korea day 5 pt. 4 – Route 7 through Ganghyeon-myeon
Last updated 2011/03/06 by Dave Kennard
You can follow any responses to this entry through the RSS 2.0 feed.
You can leave a response, or trackback from your own site.