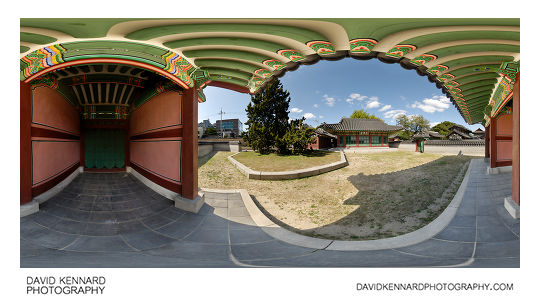 The top half of the western side of Gwolnaegaksa is separated from the bottom by a medium sized gate called Unhanmun (Hangeul: 운한문; Hanja: 雲漢門). I took the above panorama under the gate, you can see the 360° VR version here: Changdeokgung palace – Unhanmun and Bongmodang 360 VR.

From here you can also see the 750 year old Chinese Juniper tree, and the building up ahead is Bongmodang (Hangeul: 봉모당; Hanja: 奉謨堂). Bongmodang was the Hall of Upholding the Policies of Former Kings, where documents relating to the former rulers of the Joseon dynasty were kept.

To the left of Bongmodang is a building called Chaekgo (Hangeul: 책고; Hanja: 冊庫), a building where various books were kept. This area was obviously quite book-heavy, as to the south of Unhanmun is Gyujanggak (not visible in the above photo), which was the royal library. 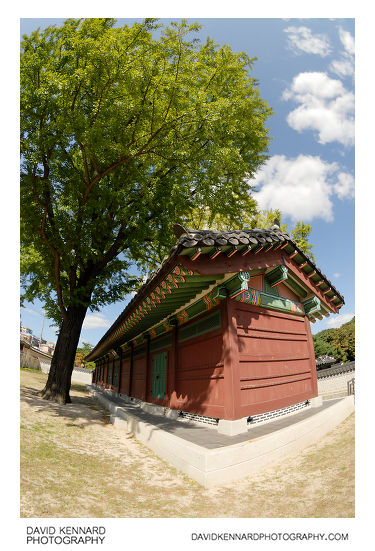 Tags: Bongmodang, Chaekgo, Changdeokgung Palace, Gwolnaegaksa, Jongno-gu, Joseon, Korea, Seoul, Unhanmun, Waryong-dong
Posted in Photos | No Comments »
This post: Korea day 7 pt. 10 – Changdeokgung palace: West Gowlnaegaksa
Last updated 2011/08/03 by Dave Kennard
You can follow any responses to this entry through the RSS 2.0 feed.
You can leave a response, or trackback from your own site.