I haven't posted anything to the blog for a while, but I have been processing some more panoramas from my holidays over the past few years. So I thought I'd share a few of the ones I've processed recently here. 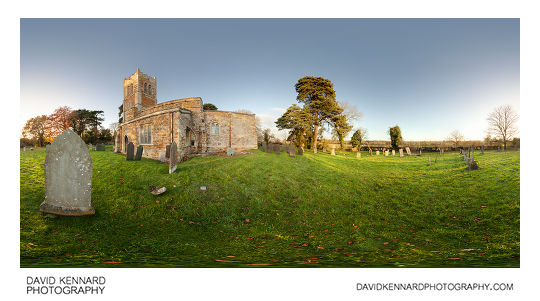 To start off with, here's one that I actually took recently. This is the 13th Century St. Nicholas Church in Marston Trussell. I was actually planning to take the panorama from underneath a large horse chestnut tree in the church grounds, which I thought would be in nice autumn colour. But when I got there I found that the strong winds had blown all the leaves off. Still, I think this vantage point from the graveyard is quite nice. 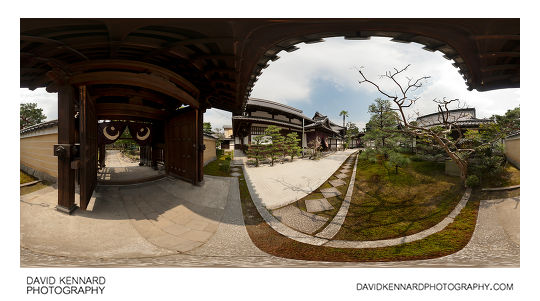 This next one I took during my trip to Japan back in 2009. It was taken in the Zen Garden of Ryousokuin (両足院), which makes up part of the temple complex of Kenninji (建仁寺), in Kyoto. On one side of the path is a mossy area, the other side is neatly raked gravel. 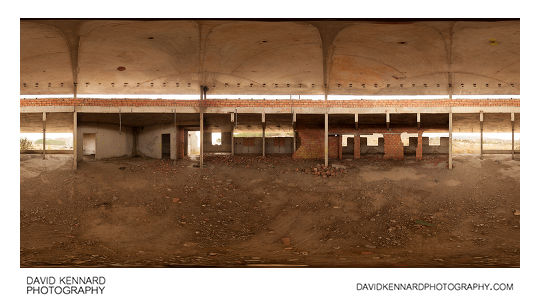 The above panorama was taken in the abandoned Medvezhonok (Медвежонок) resort, just east of the coastal town of Sudak, in Crimea. We had actually planned to visit Koktobel on this day, but when we arrived at the bus station and tried to buy a ticket, we found out there weren't any buses to Koktobel (at least on that day). Actually, we had quite a few issues during the trip with buses / trains that guidebooks and the internet mentioned, but didn't actually exist. I think possibly it may be that they only run certain services during the summer, and we were there in the autumn.

Anyway, since we couldn't visit Koktobel, we visited this abandoned resort instead. Apparently it is now used for paintball games. You can see some paintball splats on the walls if you look closely in the 360VR version. It seems that the abandoned project may still be taken up again and worked on at some point according to my internet searches. You can see what this room should have looked like (from the outside) here (the circular room on the end): проект пансіонату Медвежонок.Респупліка Крим м.Судак: адміністративно приймальній комплекс. 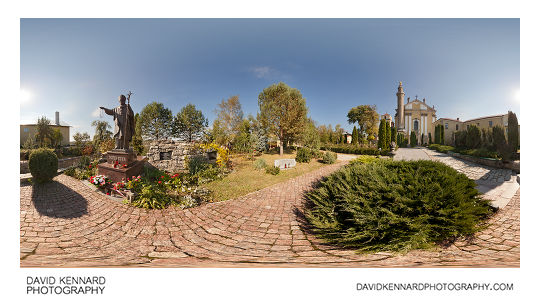 360VR version: Garden of the Cathedral of Saints Peter and Paul, Kamyanets-Podilsky 360° VR.

This panorama was taken in the garden of the Cathedral of Saints Peter and Paul (Кафедральный костел Петра и Павла), in Kamyanets-Podilsky (Кам’янець-Подільський). It is very unusual for a church, as it features a minaret. The story behind this is that Kamyanets-Podilsky was captured by the Turks in 1672, and they converted the church to a mosque, adding the minaret. When the town was given back to the Poles (it was part of the Polish–Lithuanian Commonwealth before its capture), the mosque was converted back to a church, but the minaret was left.

I'm sure I heard that it was part of the conditions of the Ottoman withdrawal that the minaret be left, but I can't find a reference for this now. In 1756 a statue of the Virgin Mary was added to the top of the Minaret.

In the panorama you can also see a statue of Pope John Paul II, this was added to the garden in 2007. In Ukraine Roman Catholic churches like this one are actually quite rare, the majority of churches are Eastern Orthodox. 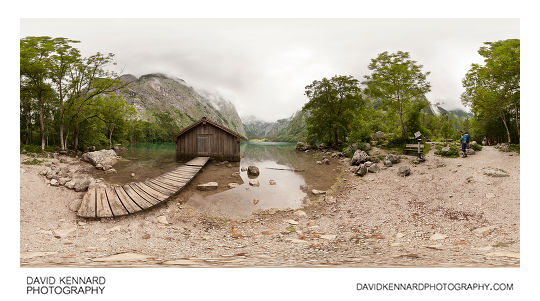 And to finish off, this one is from the Berchtesgaden National Park in Bavaria. The area is very popular with tourists, you can see quite a few in this photo. I had to wait for a while for there not to be any tourists where I wanted to take the panorama from.

The old boathouse here, on the western shore of Obersee (Upper lake) is quite a classic scene. In the 360VR version, if you look carefully, you can just make out the Röthbach Waterfall in the distance.

Tags: Bavaria, Japan, Panorama, Ukraine
Posted in Photos | No Comments »
This post: A few panoramas
Last updated 2013/12/16 by Dave Kennard
You can follow any responses to this entry through the RSS 2.0 feed.
You can skip to the end and leave a response. Pinging is currently not allowed.