A few months ago I was asked about using an infrared filter with a camera that has not had its built-in IR blocking hot mirror filter removed. The issue with using an unconverted camera is that because they are much more sensitive to red light than infrared, you can end up with an image that is mostly red light with a bit of infrared. Whereas with a converted camera you'd get an image that is mostly infrared with a bit of red.

So I decided to try and do a better comparison, looking at how the choice of infrared filter affects the results with an unconverted camera, and how it compares to a converted camera. Doing the comparison has proved very tricky, and I've learnt several things along the way, but I feel I've now got a reasonable comparison I can show and discuss. 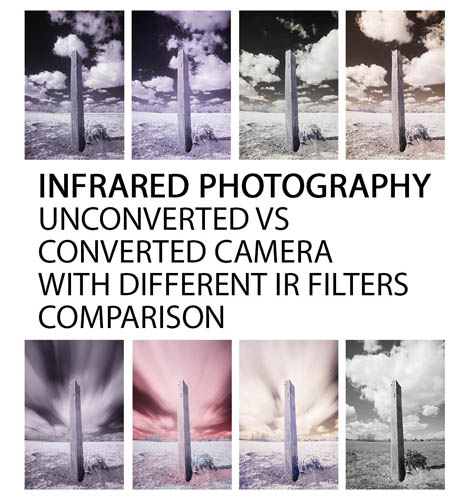 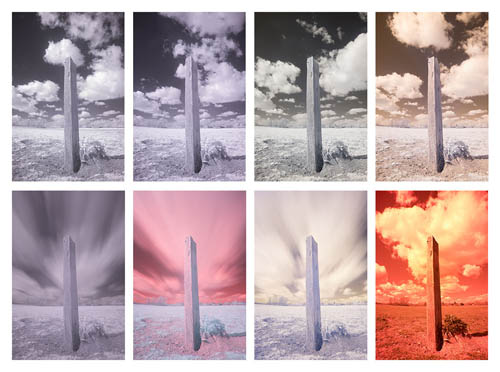 The first image on both rows was taken with a Lee #87 730nm polyester filter. The following three images (on both rows) were taken with Zomei glass filters rated at 850nm, 760nm, and 680nm respectively. The longer the wavelength, the more the filter should cut out visible light. So 730nm and above should pass pure IR, while the 680nm filter should pass some red light as well as infrared.

With regards to processing, all images have had their exposure adjusted and white balance set on the grass. An adjustment brush to correct for the lens' IR hotspot was also used in the middle of each image.

The exposure times for the unconverted camera images had to be quite long. Because the infrared filter passes mainly infrared and blocks most visible light, but the camera's internal IR blocking filter only passes a very small amount of infrared light, very little light gets through to the sensor. So a long exposure ( ~ 3 minutes ) is needed to get enough light to form a reasonable exposure.

The most obvious difference between the two sets of images is the ones taken with the unconverted camera (bottom row) are much more colourful, other than the first image. This tells us several things: 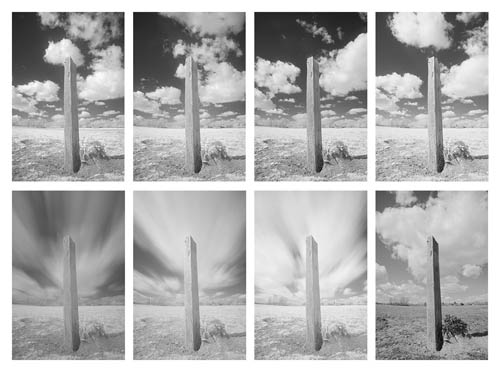 In black and white the main difference visible between the images is a lack of contrast in the unconverted camera images (bottom row). I am not sure what the cause of this is. I would guess that a long exposure, plus the presence of the IR blocking filter, gives much more time for light to bounce around inside the camera and lens, and thus cause a form of contrast reducing veiling flare.

The other thing that is obvious is that the 680nm filter on the unconverted camera (last image, bottom row) is giving an image with very little IR. The grass is much darker and the sky much brighter than the corresponding image shot with the converted camera (top row).

So far from this comparison we've seen that a 680nm infrared filter isn't suitable for use with an unconverted camera, as you get an image made from red light rather than infrared. But the other filters seem okay. We may get more colour than we wanted, or low contrast, but we can easily fix that when processing the image. Here are the images processed to my tastes: 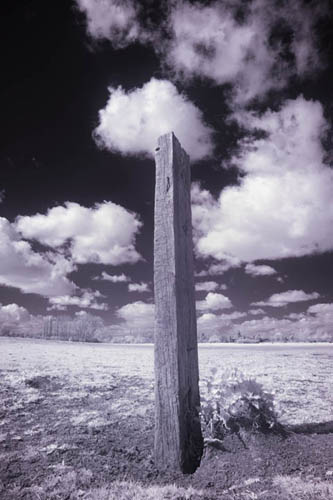 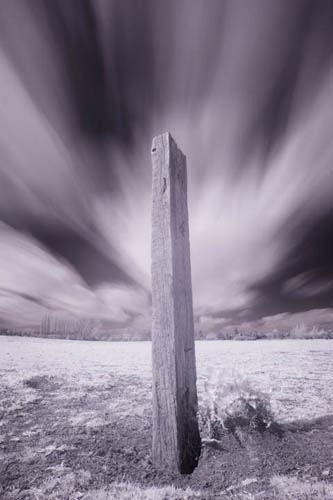 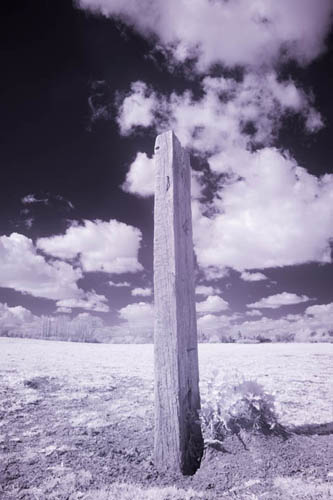 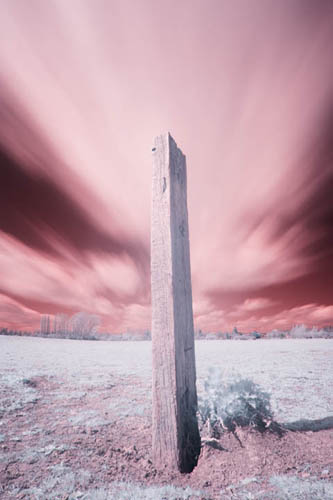 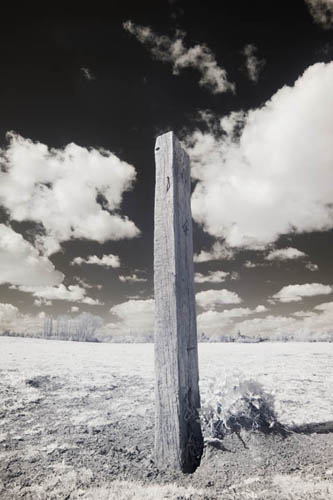 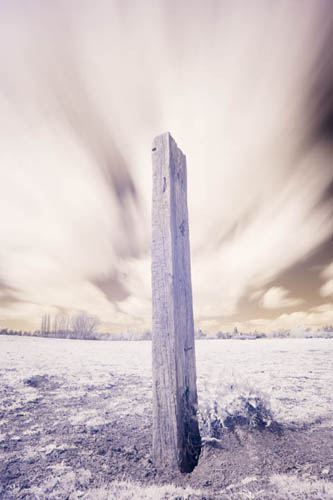 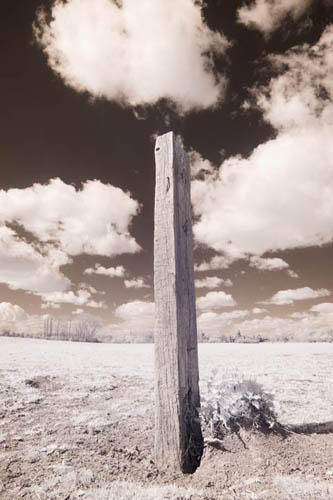 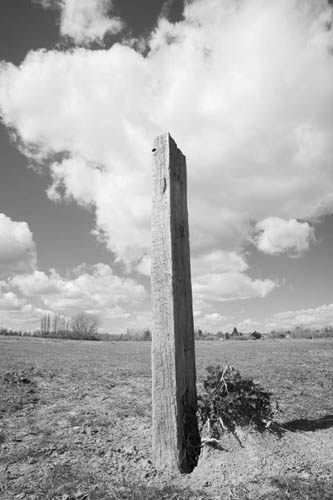 Now, those images above may look fine when displayed on the web. But the images that combine larger amounts of coloured light with infrared light (i.e. those taken on the unconverted camera with the Zomei 760nm and 850nm filters) have some significant issues at the edges when viewed close up. 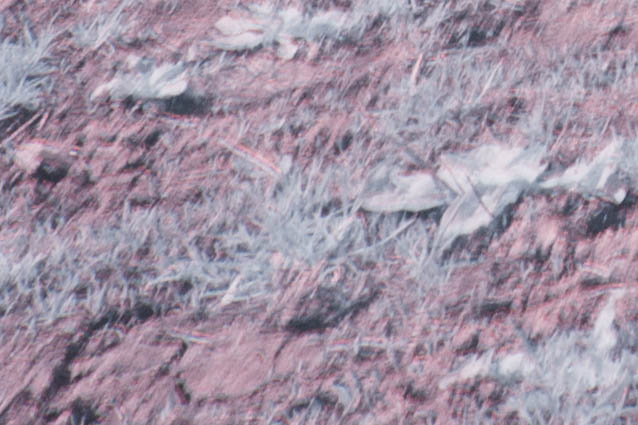 You can see in the crop above, there is a kind of double image effect, with one offset slightly from the other. What is happening here is that the lens focuses visible light and infrared light at two different distances. So we end up with a visible light image focused at one distance, and an infrared image focused at a further distance, with one overlaid on top of the other.

If we take a look at an image shot with the converted camera, we can see that because the vast majority of the image is made from infrared light, the effect is not visible: 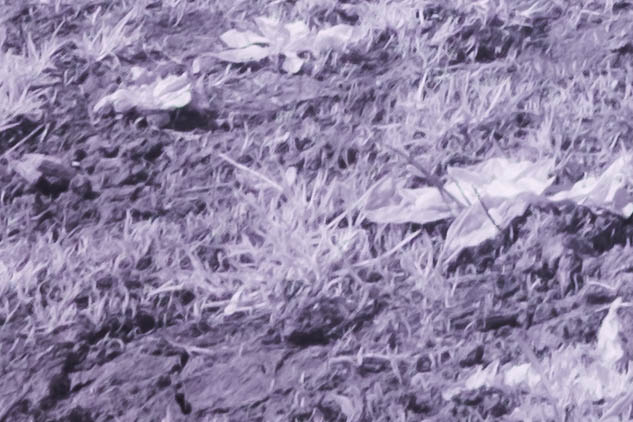 We can also use a better filter on the unconverted camera, one that blocks all visible light (such as the Lee 730nm filter): 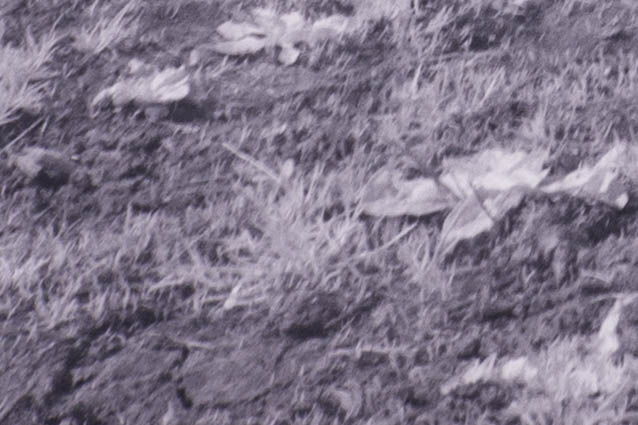 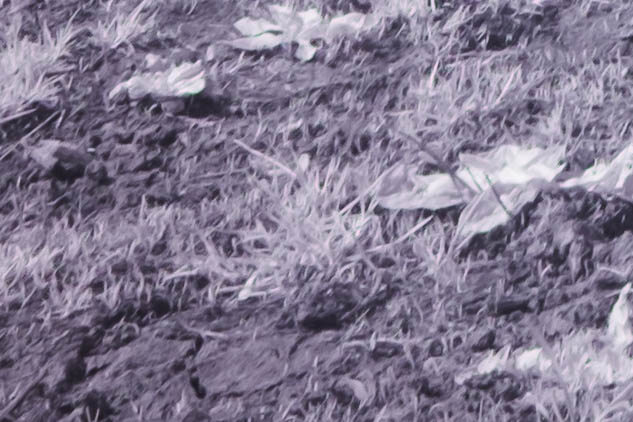 If anyone has any ideas why the 'pure IR' image would not be sharp on an unconverted camera, I'd love to hear them.

It should also be noted that whether you'll see this effect and how bad it is depend on the lens you're using. Using a different lens on the unconverted camera I get a much better result: 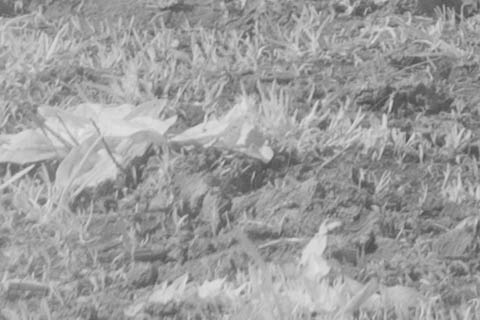 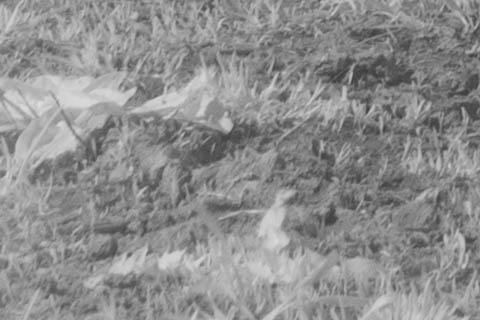 Unfortunately, while you can find lists of lenses that are deemed to be suitable or unsuitable for infrared photography, these only tend to consider whether the lens has an IR hotspot or not. I have not seen any details posted about the amount of focus shift in infrared that different lenses have.

Use with adapted lenses

When I originally started trying to take some photos for this comparison, back a few months ago, I attempted to make the comparison between my unconverted Canon 5D mk II, unconverted Fuji X-A1, and converted Fuji X-M1. On my Canon camera I was using an Olympus 24mm lens, mounted via an OM to EF mount adapter. However, I was seeing some very strange effects in my Canon images: 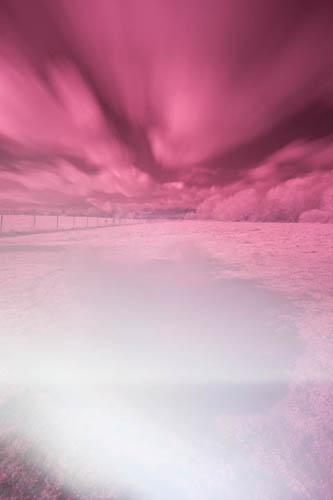 Now, it's not like the lens or adapter were loose at all. And trying to put a piece of masking tape on the adapter made it too thick to fit. So the tolerances must be very tight.

I managed to solve the issue by putting gaffer tape around the area where the lens mounts to the body, completely covering up any chance for a gap that light could leak through. But this isn't a very practical solution since it means the lens is stuck to the camera body unless you remove the tape.

So, if you're using a lens with an adapter on your unconverted camera, be aware that you may run into this issue when attempting infrared (or any kind of long exposure) photography.

With an unconverted camera that has a strong IR blocking filter (most modern cameras), infrared photography is possible but fraught with difficulties. You will need to use a long exposure. Unless going for a pure IR image, you want a lens that displays no (or minimal) infrared focus shift. And if going for a pure IR image, you need to be sure that the infrared filter you're using is a good quality one that really does only pass infrared light.

Tags: Fujifilm X-A1, Fujifilm X-M1, Fujifilm XC 16-50mm f/3.5-5.6 OIS, Infrared Photography, Lee Infrared Polyester Filter, Zomei
Posted in Photography Tutorials, Reviews and info | 9 Comments »
This post: Infrared photography – Unconverted vs Converted camera with different IR filters comparison
Last updated 2015/04/13 by Dave Kennard
You can follow any responses to this entry through the RSS 2.0 feed.
You can skip to the end and leave a response. Pinging is currently not allowed.