Following on from his previous article about the Haoge mini ball head and the design problem with that head, René Lesseux has sent me a follow-up article on how to fix it. This article details how to add a safety pin to the ball head, so that when it is used at an angle there is no longer a danger of the head separating.

If you have previously purchased one of these Haoge branded mini ball heads, or you have a similar design ball head that lacks a safety pin, you will hopefully find this post quite helpful. While it might seem rather complicated at first glance, if you have a stand drill, the right bits and the clamp to fix the supporting plank, the fix can be done in 15 minutes.

A safety pin prevents separation of the body from the core when the lock screw of the device is removed or unscrewed.

This safety pin is made up of cylindrical piece of metal pushed into a 3 mm diameter hole to be bored in the mini ball head's black body. 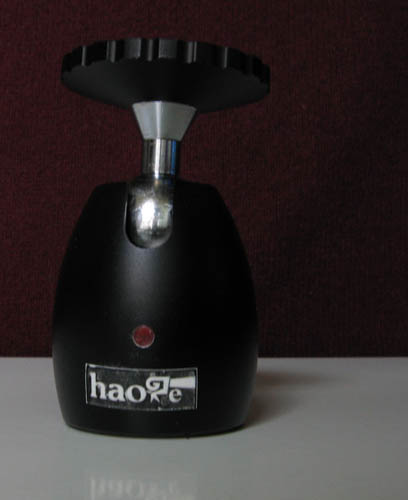 Red wax is used here to maintain the steel pin into place (and to give an expensive Leica look).

Determining the location of the safety pin 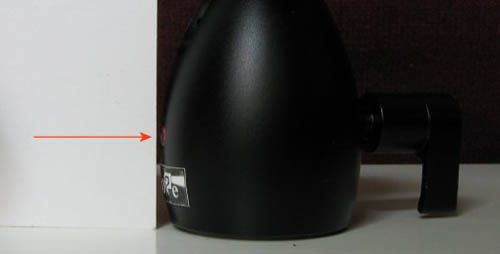 Fig 2 Location of the bore

The bore must be situated a little bit above the protuding part of the belly of the body. But to determine the exact location it is best to start by understanding the way the safety pin will operate. 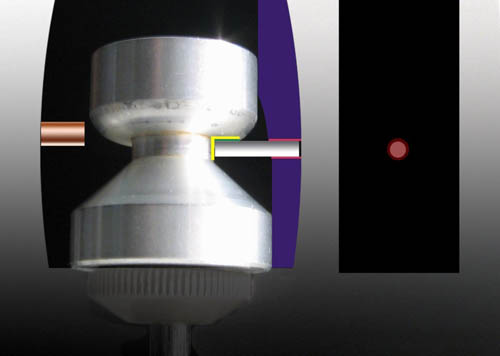 The image shows the approximate location of the M8 threaded bore used by the ball lock lever (represented here in brown) and the way the safety pin (represented in gray) will operate.

The safety pin must target a 4 mm by 4 mm area, indicated by the yellow lines, so that a permanent line of contact (green line) is created between the top of the cylinder and the surface of the ring at the base of the cup holding the ball. 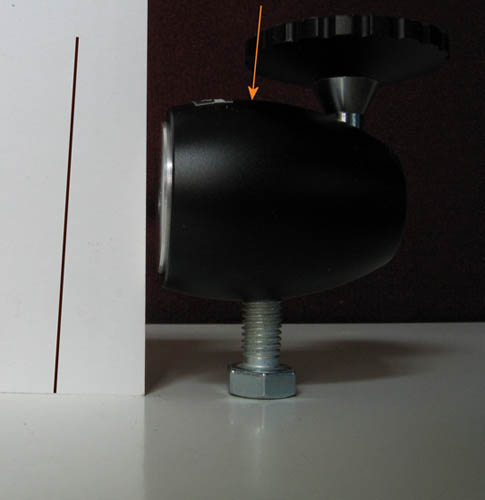 Using an M8 bolt in the bore used by the ball locking screw will greatly help us in firmly attaching the body of the mini ball head when boring our 3 mm diameter hole for the safety pin. 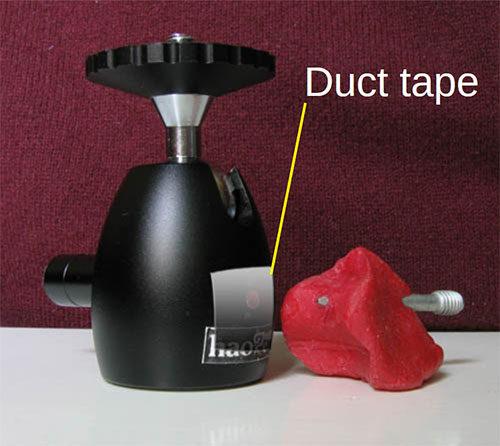 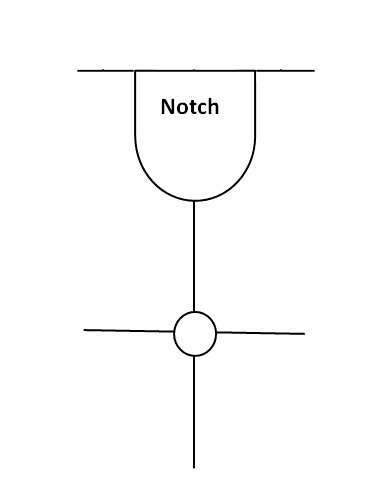 Fig 6 Marking the bore point on the duct tape

The target point is the intersection of the horizontal scratch and the vertical line passing down through the centre of the notch.

Fixing the body for boring

Fig 7 The ‘housing’ of the bolt

An 8 mm diameter traversing hole is bored and a slightly bigger one to accommodate the head of the M8 bolt. 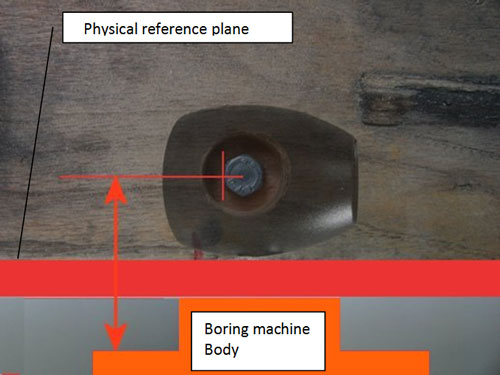 The reference body (red) is fixed in relation to the boring machine column (orange).

The plank was placed against the reference body when boring the hole to house the bolt.

The objective is to have the boring bit perpendicular to the axis of the ball head body. 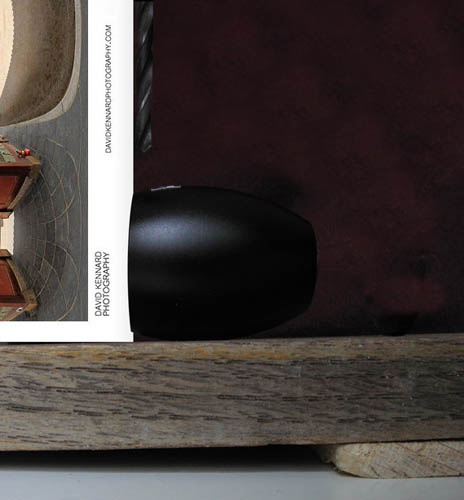 Fig 9 The tilted plank on a wood wedge

When the right angle is found the support plank and the wedge are pushed against the reference plane to put the drill bit above the boring location marked on the duct tape (not shown here).

The object used as a safety pin is any cylindrical piece of metal entering the 3 mm diameter hole. For example, a steel nail (with tip cut off), a piece of clothes hanger wire, etc.

With the mini ball head assembled, the pin is pushed into the hole until it touches the core.

The pin is marked flush to the suface of the body then extracted from the mini ball. It is then cut 1 mm shorter than the marking, so it will fit completely inside the body.

The cut to length pin is pushed back into the hole and some putty added (e.g. wax or glue) to close the hole and prevent the pin from falling out.

Tags: Ball Head
Posted in Reviews and info | No Comments »
This post: Fixing up the Haoge mini ball head
Last updated 2016/02/28 by Dave Kennard
You can follow any responses to this entry through the RSS 2.0 feed.
You can skip to the end and leave a response. Pinging is currently not allowed.