And also compare the difference between flash and the torch for reflected UV photography. 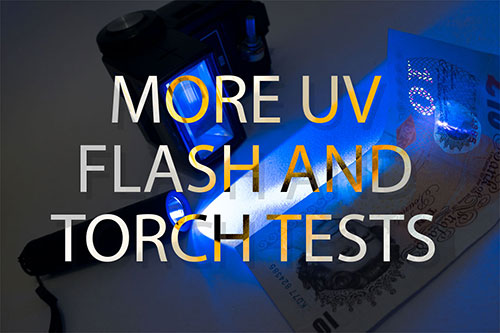 Unfortunately I couldn't easily find any flowers with UV markings, so I just went with a Chrysanthemum flower that was available. All photos were taken at ISO400 and f/5.6 using the 80mm/5.6 EL-Nikkor. A Baader U Venus filter was used to restrict the captured light to UV only. The flash and torch were held the same position and distance away from the subject. 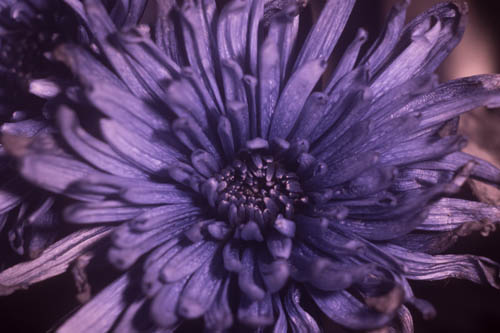 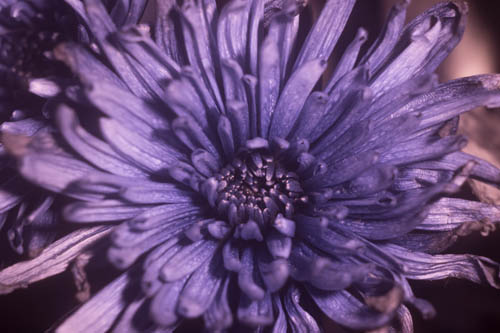 The plastic protector is just a piece of clear plastic cut from an old CD case that I use to replace the flash's UV blocking fresnel lens. Adding a piece of plastic rather than leaving the front of the flash open helps protect the flash bulb from any knocks, which could break it.

The plastic causes around half a stop of light loss. This might not seem like a lot but with UV you really need all the light you can get. Shooting without the plastic is equivalent to adding another flash firing at half power.

Still, I'll keep using the protective plastic on mine as I don't want to risk breaking the flash bulb. 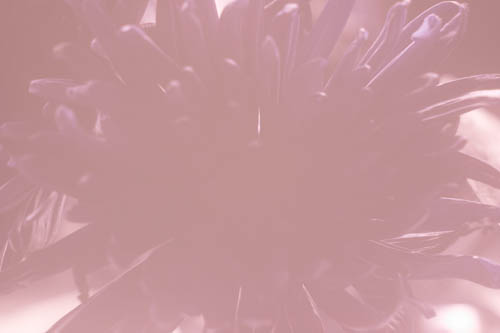 This probably wasn't quite a fair test for natural light as the flower was more backlit than front lit. But as you can see, indirect sunlight results in a washed out image and a very long exposure time was needed to gather enough light to create the image. 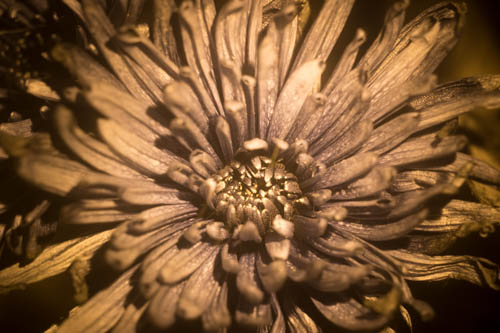 What's immediately obvious here is the difference in colour from the other images. However, there are also tonal differences - the centre of the flower is quite a bit brighter while the edges are darker in the torch image.

This is likely down to the torch having a much brighter centre and fading in brightness towards the edge of the beam. Whereas the lighting from the flash is much more even. Possibly a different reflector in the torch could help.

If you compare the shadows, you can also see the flash gives softer lighting as it is a larger light source than the torch.

The shutter speed has to necessarily be a lot slower due to the torch being a constant light source rather than the quick blast of light you get with the flash. With the flash you're getting an effective shutter speed around 1/1000s (the flash duration), considerably faster than what's needed for the torch.

This makes the torch only really useful for controlled working conditions where there's no wind. Whereas the flash can be used for outdoors photography as the fast duration freezes the subject and prevents motion blurring. 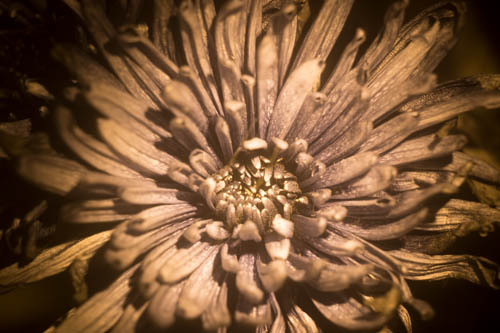 Removing the protective glass (or it might be plastic) from the front of the torch yields a very small increase in brightness, but less than one third of a stop so far as I can tell. 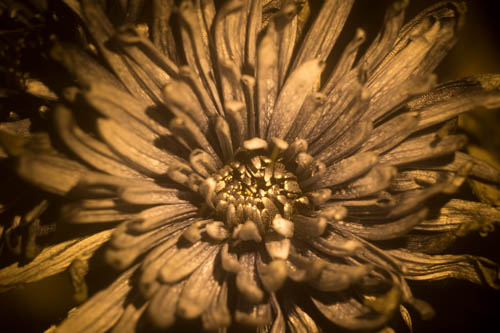 GearBest, who I bought the torch from, also offer a ZWB2 filter. This passes light from around 300 - 400 nm, cutting visible light. It passes IR light also, but since the torch doesn't generate IR light this doesn't matter.

Using this filter causes around one third of a stop of light loss. Looking at the transmittance graph for the filter, it appears optimised for 365 nm, peaking around that wavelength with 85% transmittance. So this would indicate that the vast majority of light the torch is putting out is around 365 nm, else we would expect to see a bigger drop in brightness with the filter. 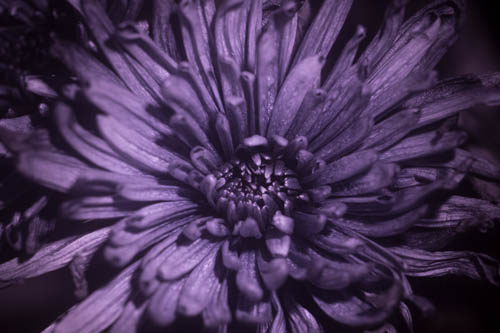 Finally, we have my Ultrafire torch that I tested previously against some very cheap UV torches: Cheap UV torches - flashlights for UV induced fluorescence comparison. The colour and tonality is nearer the flash than the Convoy torch. This may be because the Ultrafire torch has a larger head.

This test was similar to the one with the flower. Aperture was set to f/5.6 and ISO 200. A Baader U Venus filter was used to restrict the captured light to UV only. 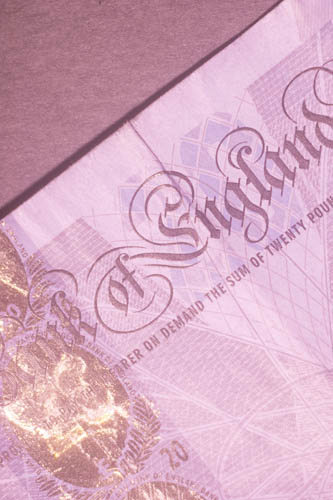 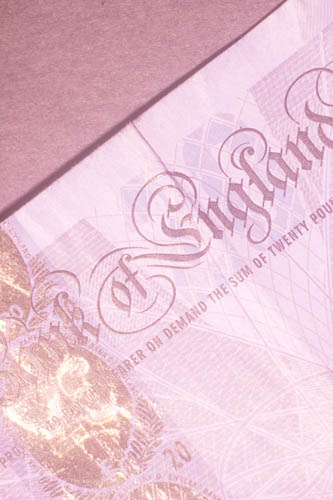 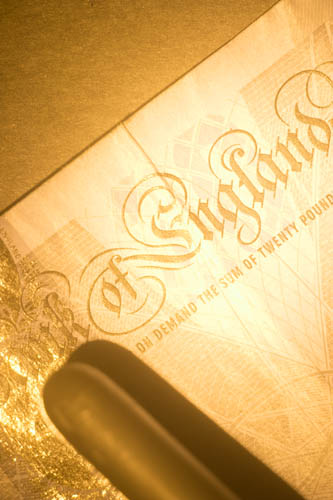 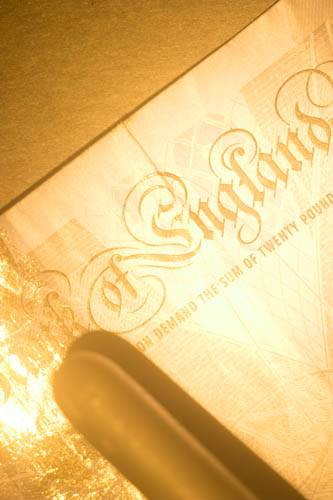 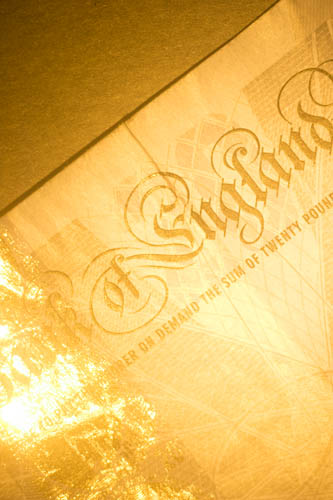 The images above just show the same things I saw in the flower test. 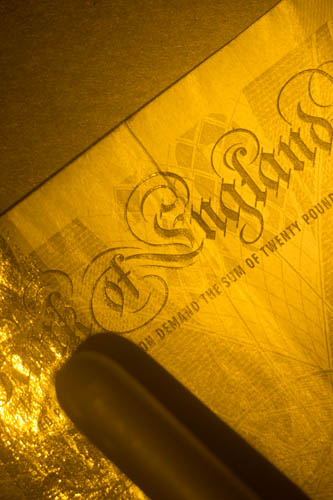 Using the Convoy torch with the 330WB70 UV pass filter that I had purchased for use with the Ultrafire UV torch gives around 1.5 stops loss compared to the clear glass. For UV only use this filter is not needed (not to mention it's too large to insert as a front glass on the Convoy and must be held manually on the end of the torch).

These were all shot at f/5.6, 1/10s ISO100. I still used my full spectrum camera but a B+W 486 UVIR cut filter was used to restrict the captured light to visible light only. 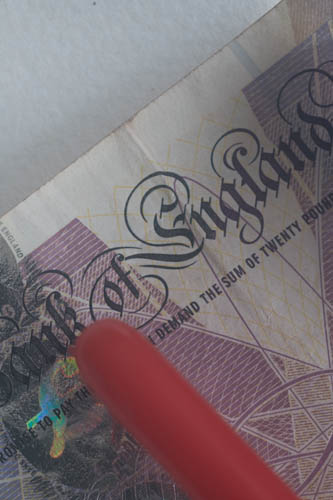 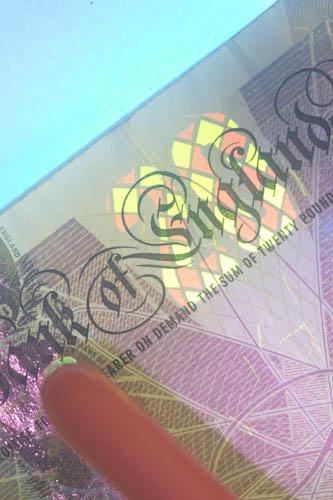 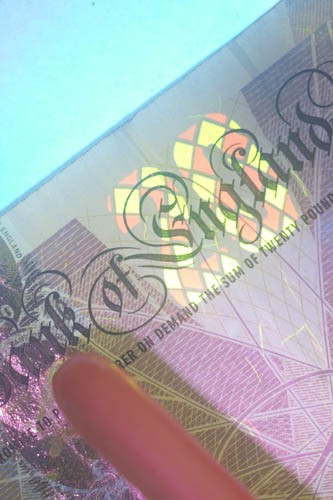 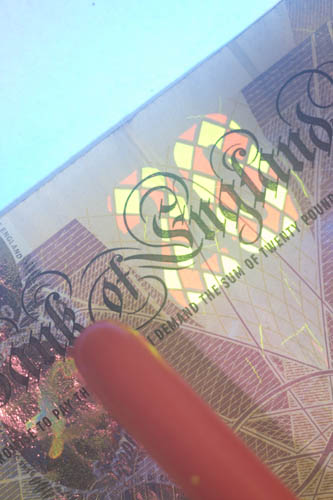 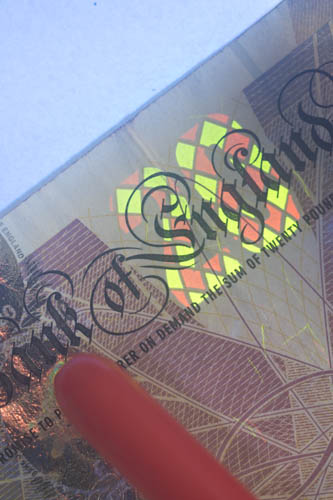 I tried to white balance each of the images as best I could, using the £20 note. The part at the top of the image is some white card, which fluoresces blue.

The Convoy torch does seem to output some visible violet light. This isn't reduced that much by the cheap ZWB2 filter, but is attenuated by the much more expensive 330WB70 filter.

Using clear CD plastic to replace the UV blocking fresnel lens of a flash does block some UV light. At half a stop UV light loss I think the trade-off is worth it for keeping the flash tube protected.

The Convoy S2+ Nichia LED 365nm UV torch / flashlight is a very nice and powerful (compared to most other options) UV light source. The price seems to vary a bit, but it is far less than any of the Nichia UV torches previously have been. I've actually ordered another one now so I'll have double the power.

As well as UV induced fluorescence, the Nichia UV torches are also useful for adding enough UV light to a subject so that focusing in liveview can be used. Then flash can be used for the actual image.

In terms of the colour differences between reflected UV photos taken with the flash and torch, I need to do some more testing on this front. Colour isn't really important in UV photography since it is false colour. But there must be a reason for the difference in colour.

Tags: UV induced fluorescence, UV Photography
Posted in Reviews and info | 3 Comments »
This post: More UV flash and torch tests
Last updated 2016/08/16 by Dave Kennard
You can follow any responses to this entry through the RSS 2.0 feed.
You can skip to the end and leave a response. Pinging is currently not allowed.