An hour in Gwangju

I haven't posted anything here in quite a while. I don't really have anything interesting to write about at the moment, however to break the silence I thought I might as well post a few photos.

These photos are all from my first day in Gwangju (광주시), Korea, on the 6th November 2015. After arriving there by bus from Busan, I checked into my hotel. Then after settling in I went on a short walk back to the bus terminal from whence I had come. 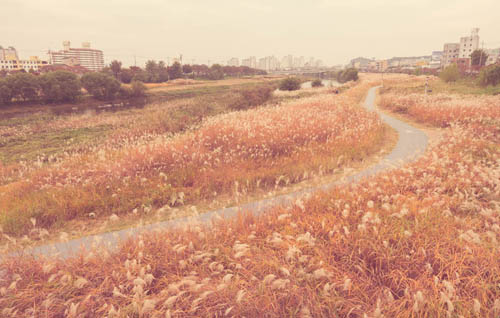 Gwangju has several rivers that go through the centre of the city. This one was near where I was staying. The river bank in this area had lots of tall fluffy topped grass (sorry, I don't know that plant's name) in autumnal orange. The path running through the grass looks slightly like a river at the small viewing size above.

When processing the above image I originally went for a relatively high contrast look. But then in the curves presets I noticed as well as the standard Linear, Medium, Strong, and Custom, I also had an image filename. So I clicked on that, wondering what it was, and it gave the low contrast image you see above. (The preset just pulled up the black point on the y axis). And I decided I actually quite liked that look. 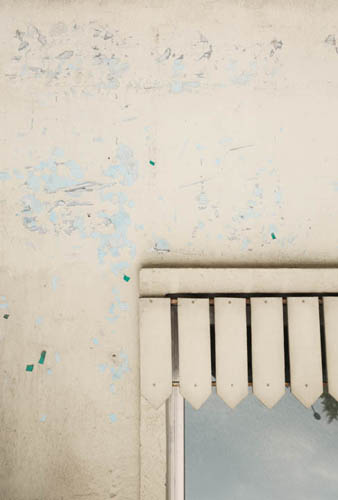 The above is a photo I've flipped in post. I think when viewed normally the spikes act as a barrier, deflecting the eye out of the image. But pointing down like this they provide an easier way for the eye to travel through the image from top to bottom.

It's just a close-up of a window and wall of a house on the (long) street I walked down between my hotel and the bus station.

I'm pretty sure this was taken inside the U-Square Gwangju Bus terminal (유스퀘어 광주종 합버스 터미널). Unfortunately I lost my tablet later in the trip, (which I used for recording my gps tracklog each day), and hadn't been backing up my tracklogs. So I can't be 100% sure.

It's funny, I travel 100s of miles to go on holiday then take photos that I could get back home. I think the thing is that when I'm away on holiday there's not much to distract me from photography. Whereas when I'm home in the UK there's about a million other things all vying for my attention. 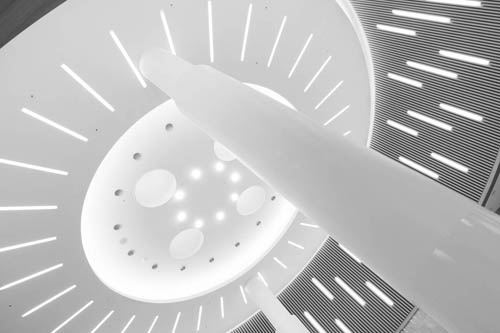 You might be able to tell, this photo above was taken looking up from where the previous image was taken. It's a black and white (desaturated), the original photo has quite a bit of colour. I actually quite like the colour version too, but decided on the black and white one to share here.

I'm not sure what this place is - ZZAK 룸 소주방. It has Soju (rice wine) in the name, so maybe some sort of drinking establishment? It was opposite the bus station (I think), and I liked the colourful window contrasting with the drab concrete.

I'm rather impressed with my keeping the lines straight on this one, as I'm usually pretty bad at that. The image hasn't been straightened in post at all.

The day was drawing in, and it started raining slightly so I started back up the road towards the hotel. I had hoped I might have a bit more time to actually do something after spending so much time just travelling (including packing and unpacking).

On the way back I took the photo above of a large Wedding Palace. Basically a place to have a Western style wedding without attending a church. The wide angle perspective does rather diminish the large size of the building, but the cars parked right in front of it add an idea of scale. 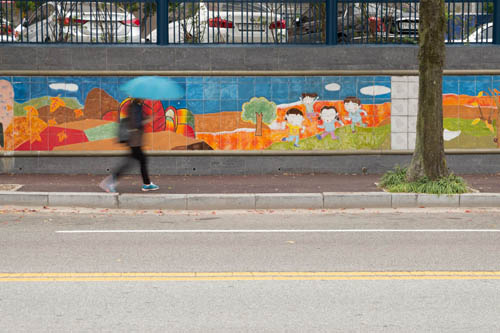 I think I must have taken a detour down a side road and managed to snap this lady attempting to camouflage her umbrella against a colourfully painted wall. 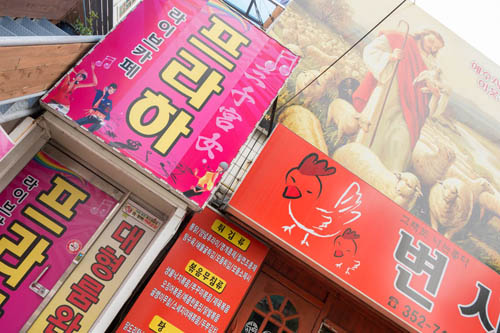 To finish off with, a photo of a building that appears to host a fried chicken restaurant, karaoke parlour, and church.

If you've got this far I hope I didn't bore you too much. I find the everyday more interesting than I do boring when I can take the time to really look and observe.

P.S. I did spend a few days in Gwangju but only had just over an hour for my walk on my first day there, hence the title of this post.

Tags: Gwangju, Korea, South Korea
Posted in Photos | No Comments »
This post: An hour in Gwangju
Last updated 2016/08/10 by Dave Kennard
You can follow any responses to this entry through the RSS 2.0 feed.
You can skip to the end and leave a response. Pinging is currently not allowed.