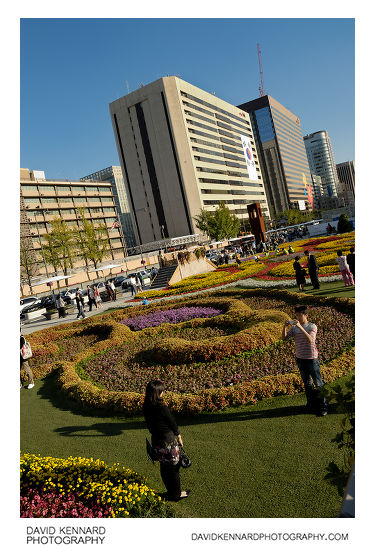 Unfortunately we were in Korea about a week too early to see the statue of King Sejong the Great on Gwanghwamun Plaza, as it was only unveiled on October 9th 2009. In the photo below you can see the enclosure surrounding the platform on which the statue was to placed:

Along the sides of Gwanghwamun Plaza there were some decorated fibreglass Haechi / Haetae, a bit like the fibreglass cows. The Haechi (해치), or Haetae (해태), is a fire eating dog that has become the mascot for Seoul. 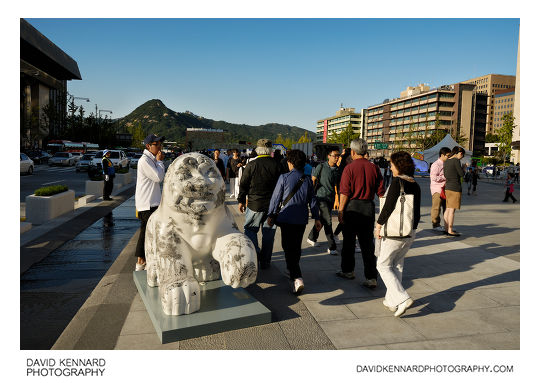 A bit further on down Gwanghwamun Plaza we come to the Admiral Yi Sun-sin statue and fountain: 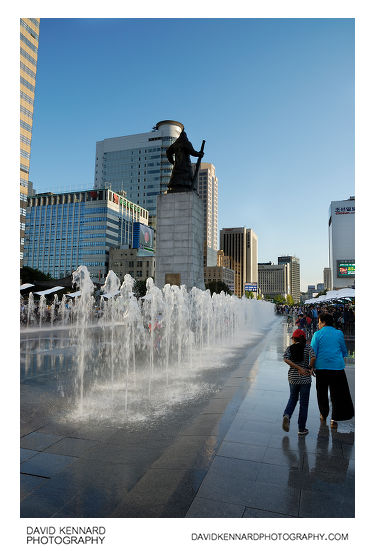 Admiral Yi Sun-sin was Korea's most famous Naval commander. He fought against the invading Japanese in the late 16th Century, winning every battle he fought in, and inflicting heavy losses on the Japanese navy. 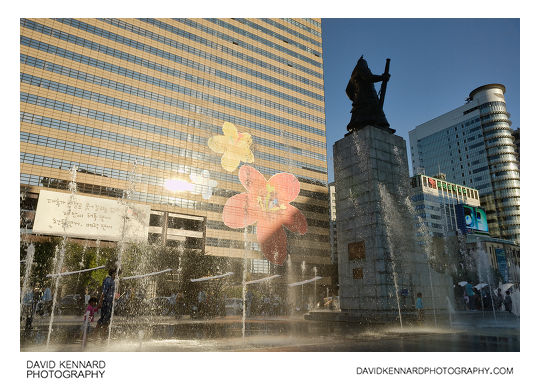 The fountain is called the 'Admiral Yi Sun-sin Fountain' (이순신 분수), or is also known by the name “Fountain 12.23“ (분수 12·23). This is because 12 is the number of ships Yi Sun-sin used to defeat an opposing Japanese force of 133 vessels, and 23 is the number of battles Yi fought and won. There was some controversy over the name 'Fountain 12.23' though, as 23rd December is the birth date of Akihito (明仁), the current Emperor of Japan. (Korea and Japan have long had an uneasy relationship). 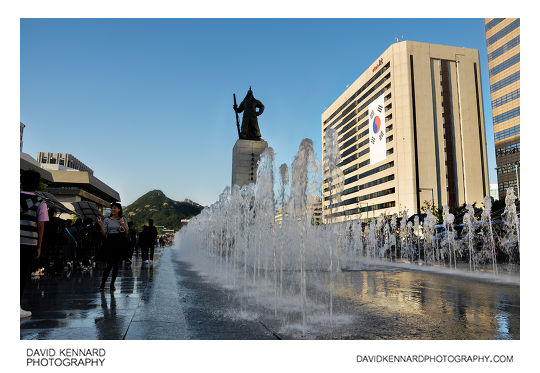 Tags: Admiral Yi Sun-sin, Admiral Yi Sun-sin Fountain, Fountain, Fountain 12.23, Gwanghwamun plaza, Haetae, Jongno-gu, Korea, Seoul
Posted in Photos | No Comments »
This post: Korea day 3 pt. 15 – Sejongno and Gwanghwamun Plaza
Last updated 2010/11/24 by Dave Kennard
You can follow any responses to this entry through the RSS 2.0 feed.
You can leave a response, or trackback from your own site.