Full spectrum, Infrared, and visible light photography at night with the Fuji IS-Pro

Carrying on from my testing of the Fuji IS-Pro with various filters, next I tested the camera at night, comparing visible light only photography to full spectrum photography. By full spectrum, I mean the full spectrum that the IS-Pro can detect, i.e. light with a wavelength between 380nm and 1000nm. If you click the filenames of the two images below you can download RAWs to compare yourself. 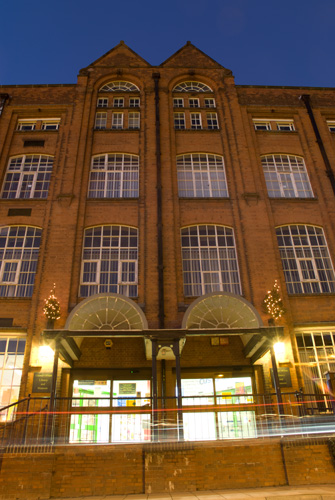 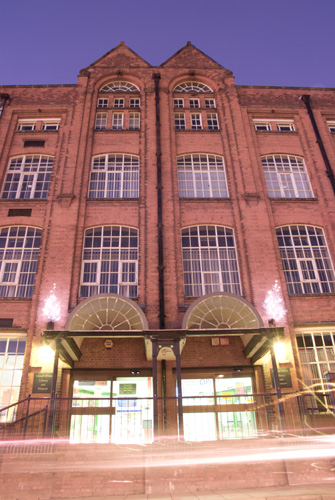 The full spectrum photo has a reddish cast, turning the sky slightly purplish. I don't find it particularly objectionable or 'unrealistic' though.

With regards to detail, the visible only image wins again. I would say there isn't as much difference between the full spectrum and visible only photos as there is during the daytime though. This is probably due to there being less IR light around at night. 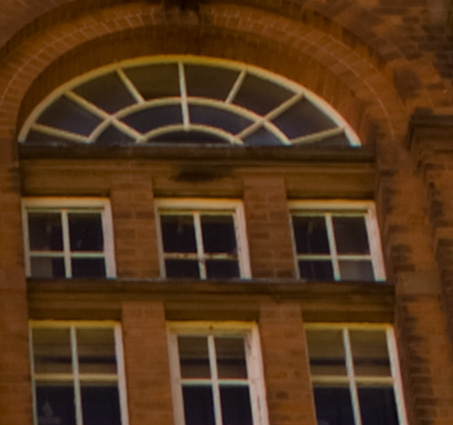 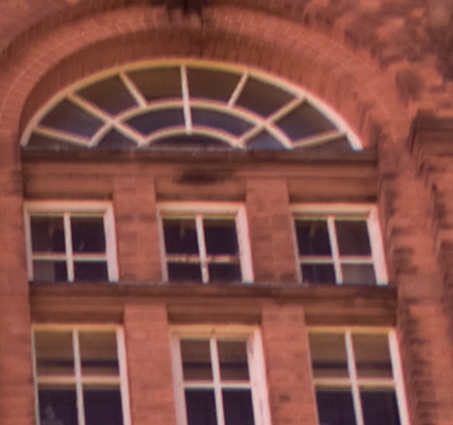 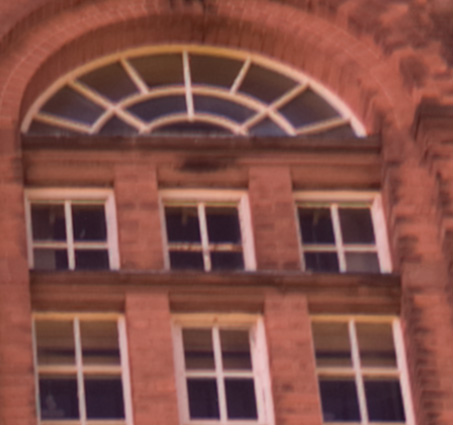 I also tried using CA correction on the full spectrum photo, I would say it is a very minor improvement. Definitely still behind the visible only photo.

The below two images were shot with tungsten white balance: 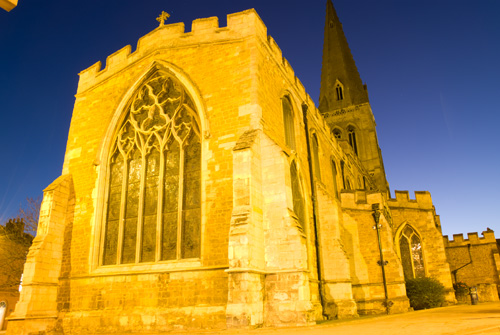 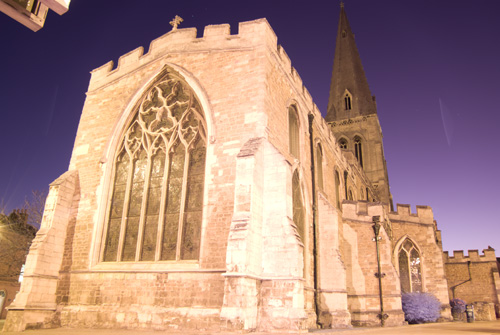 As you can see, the full spectrum photo has a much more neutral white balance of the church, a bit too neutral really. The sky is slightly purple, and the purple bush further back in the photo gives away that the photo contains IR. The visible light only photo is darker again, and the church has a very yellow tone despite the tungsten white balance setting.

Adjusting the white balance to try and get the correct colour of the church (yellow sandstone or ironstone), I ended up with the below: 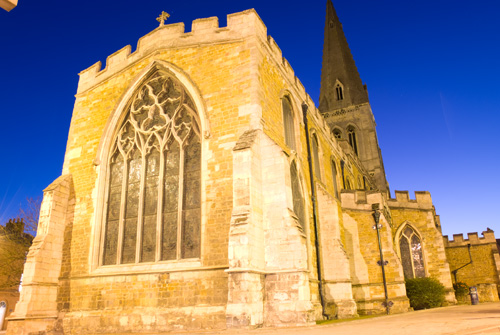 Visible light only with wb adjusted 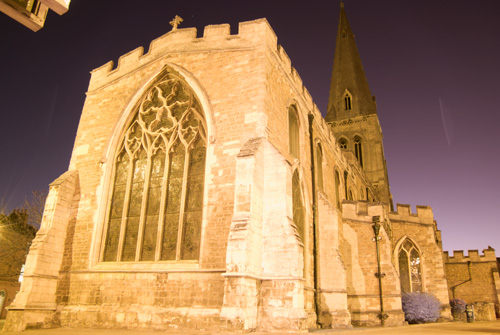 For the visible light only photo, I think the Church looks quite good, but the sky is far too blue. For the full spectrum photo I tried using both the white balance adjustment in ACR and curves in Photoshop, though found it hard to get the colour of the church quite right without toning everything yellow too much.

Again, for these photos the visible light only photo contains more detail than the full spectrum photo.

Here's some photos of a shopping street with cars moving past: 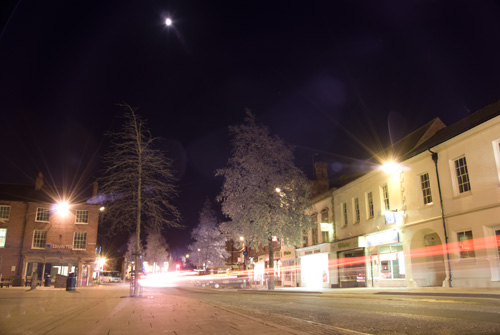 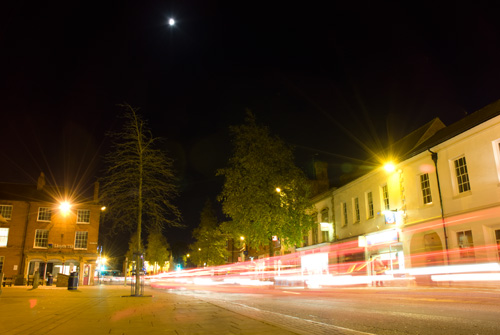 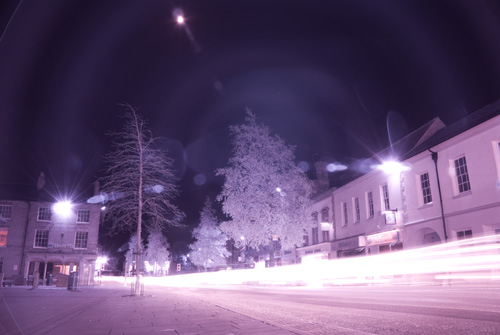 The full spectrum photo seems to have a more neutral colour balance again, with the shops not having such a yellow cast from the lights. Lens flare isn't very good on any of these shots, but the Infrared only shot is particularly bad.

To compare lens flare, I went out again another night, and did another test shot: 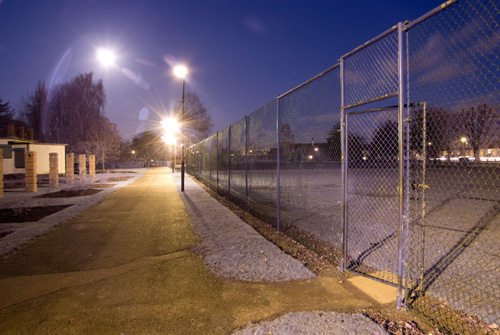 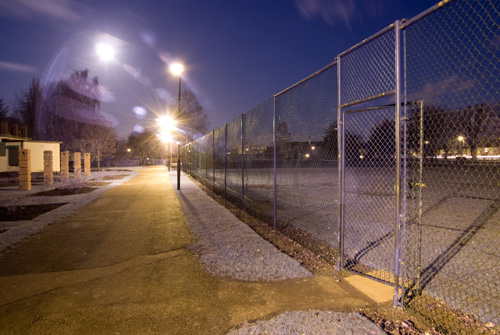 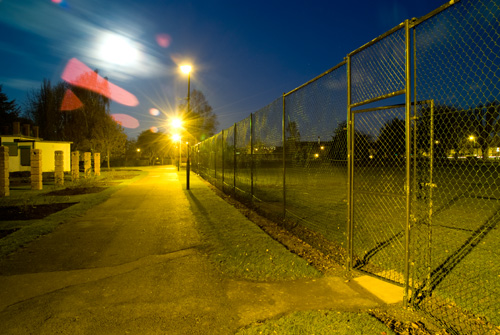 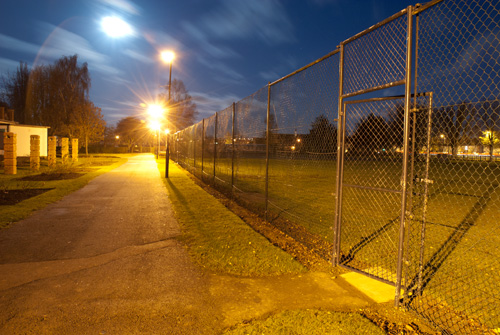 These were taken still using the same Nikon 18-70mm/3.5-4.5 lens used for all the other photos, and with the lens hood attached. The full spectrum photo on the IS-Pro displays quite a bit of lens flare. Adding a UV filter only worsens it. And replacing the UV-cut filter with the UV-IR cut filter makes it even worse, with a big chunk of red lens flare appearing.

The D200 image meanwhile, taken with the same lens and no filters, doesn't display too much lens flare. There is a large arc lens flare on the left hand edge of the image, but I don't find this very objectionable. There are also smaller circles of lens flare to the left of the lamps. These are more objectionable, but still a lot better than the Fuji.

The photos for this lens flare test should not be compared in terms of exposure - they were taken with different shutter speeds and adjusted for exposure in ACR.

So, I don't think I will be using the Fuji IS-Pro for night photography, mainly due to the lens flare issues.

Tags: B+W 486 UV-IR Cut filter, B+W UV 010 MRC filter, Fuji IS Pro, Hitech 85 Infrared filter, Infrared Photography
Posted in Reviews and info | No Comments »
This post: Full spectrum, Infrared, and visible light photography at night with the Fuji IS-Pro
Last updated 2011/12/12 by Dave Kennard
You can follow any responses to this entry through the RSS 2.0 feed.
You can leave a response, or trackback from your own site.