In this post I'll cover how you can use filters on the Tokina 10-17mm f/3.5-4.5 AT-X 107 DX Fisheye lens, a lens that doesn't accept filters. Possibly the same techniques may be able to be applied to other lenses that don't accept filters. 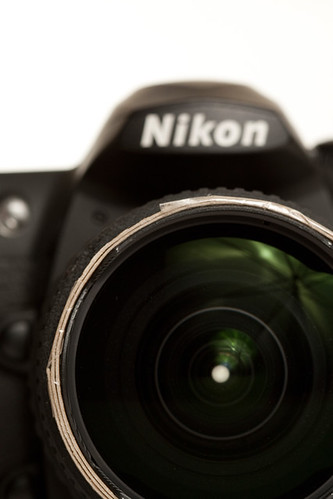 The cardboard band is just a long strip of thin cardboard that you wrap round the lens hood. You then trim pieces off (or stick extra pieces on) until it is the right thickness, then stick it together (I just used sellotape).

I have a 67mm adaptor ring for my Cokin P filter holder, so I made my cardboard band thick enough that I could wedge the adaptor ring onto it: 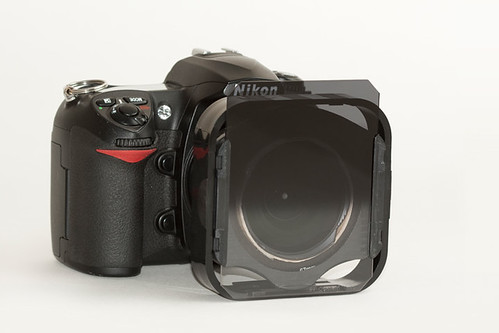 I found that the setup like this was usable from about 12mm upwards without vignetting. I took the lens out on a field test with the Cokin P filter holder and my cardboard adaptor, and found it worked well.

When testing the setup with a Hitech 85 Neutral Density Split Grad Hard Edge ND 0.9 filter, I found that at shorter focal lengths, with the camera in portrait orientation, and the horizon near the top or bottom third of the image, the corners of the filter would be visible in the viewfinder. (The Hitech filter has the corners cut off, a completely rectangular filter of the same size may not have this problem).

However, when I was processing the photos, I couldn't see any photos that had the filter corners visible in the image. 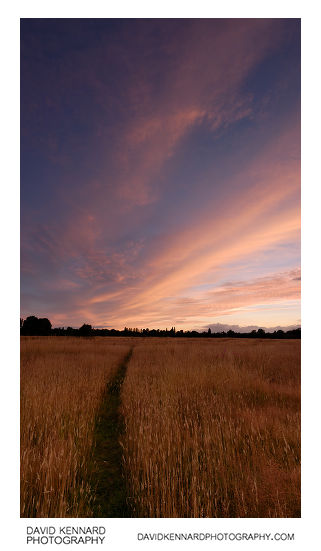 When defishing the Tokina fisheye images, I generally prefer to have a landscape orientation anyway, where you shouldn't have any problems with the filter corners getting in the frame.

Despite the curved horizon from the fisheye, and the straight edge of the split ND filter where the dark part of the filter starts, I didn't see any problems from this in my photos.

Here's one of the photos, you can see the curved horizon, but you can't see a straight line across the image where the split ND filter was placed. This was taken at 13mm, ½ second at f/8, ISO100. 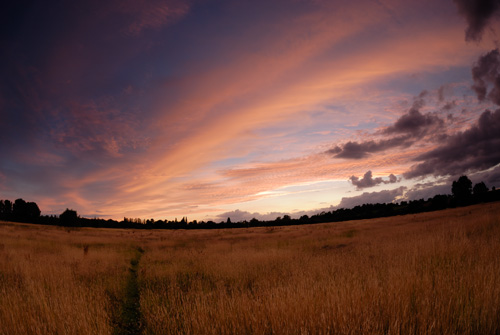 And this is the same image when defished to rectilinear projection: 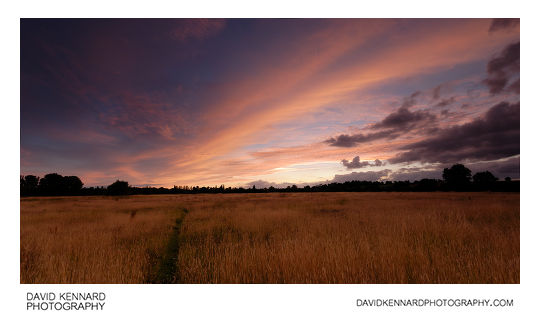 When using the Cokin P filter holder with the Tokina 10-17mm f/3.5-4.5 AT-X 107 DX Fisheye lens, it is important to make sure you are using the thin version of the filter holder, otherwise it will stick out too much and you'll get bad vignetting. I don't actually have a thin version, but I filed down one of the cheap chinese Cokin P compatible filter holders that I received with a Cokin P adaptor ring I bought on ebay. 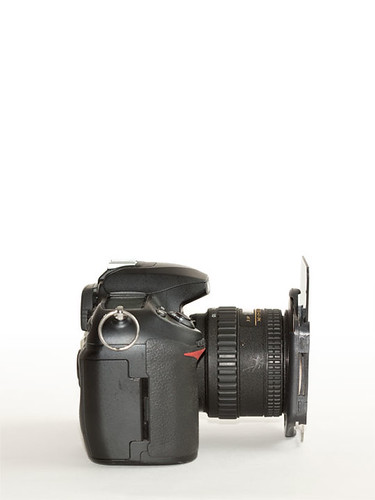 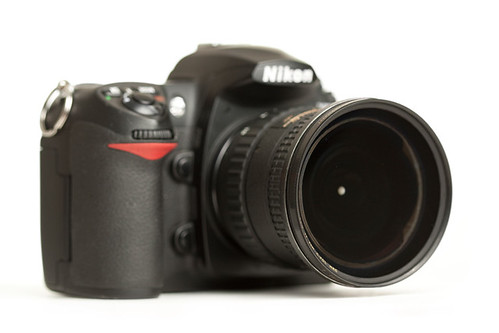 The larger the filter size the less likely you'll be to have vignetting. If you're using a filter that comes in a 'thin' variant, then this will reduce vignetting at wider focal lengths compared to a standard 'thick' filter. With my 'thick' 77mm polariser filter I found it was usable without vignetting from 13mm upwards.

I didn't realise it, but I read here: Tokina 10-17mm Fisheye filter, that you can actually screw filters straight into the built-in lens hood of the Tokina 10-17mm f/3.5-4.5 fisheye lens.

I had previously noticed that the lens hood of the Tokina fisheye did appear to be threaded, but didn't think it was a 'proper' filter thread. All information I'd previously read on the Tokina 10-17mm f/3.5-4.5 AT-X 107 DX Fisheye lens had said that it couldn't be used with filters.

Well, the Tokina 10-17mm f/3.5-4.5 fisheye lens hood actually has a filter thread size of 58mm. The filter thread isn't constant though – there are gaps in it due to the petal hood design of the lens. I think this would make screwing filters straight into the lens hood less secure than with a standard lens filter thread, but still, it's probably more secure than the cardboard band wedging method. 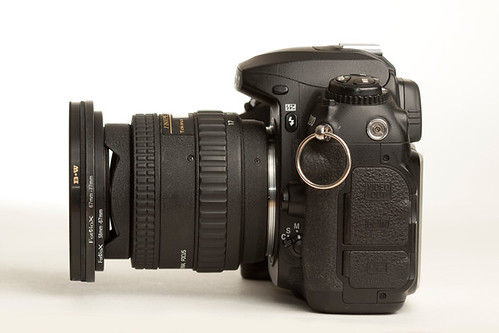 A problem with this method though, is that due to the petal hood design, there is a possiblity that light could enter through the holes in the petal hood and cause lens flare. I already had a 58mm step-up ring, so I tried mounting a filter using this method, but I didn't take any real life shots using it, so I can't say whether flare would be an issue in real life.

Screwing in a 58-67mm step-up ring, and then a 67-77mm step-up ring, I found my 77mm polariser filter was usable without vignetting at 15mm upwards, which compares to 13mm upwards for the cardboard band filter mounting method for the same filter. This difference can be partly (mostly?) attributed to the extra step-up ring involved when screwing the filter in. If I had a 58-77mm step up ring, then the difference in vignetting between the two filter mounting methods would be much less.

An advantage of screwing the filters into the lens hood is that you don't have to worry about the back of the filter knocking against the lens hood, which could scratch the filter. This is something that could happen quite easily if you are using the cardboard band filter mounting method.

For my own purposes, I will probably use the cardboard band filter mounting method along with the Cokin P filter holder occaisionally. I don't think I would want to use my screw-in polariser with the Tokina fisheye lens, as the field of view is too great and the polariser would create an uneven effect across the sky.

If I did want to use a screw-in filter, like a strong or variable Neutral Density filter, then I would probably use the screw-in filter thread built in to the lens hood for mounting it, to avoid scratching the filter glass. But I don't have any screw in filters I would want to use, as other than my polariser, all my filters are resin filters for the Cokin P filter system.