Back in the main grounds of Gyeongbokgung Palace, we next went to Hyangwonji lake (향원지), where I took a panorama at the end of the bridge: 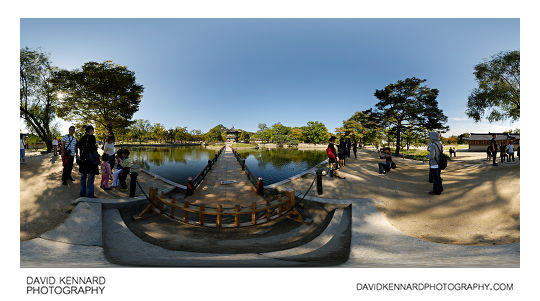 Hyangwonjeong (Hangul: 향원정; Hanja: 香遠亭), or Hyangwonjeong Pavilion, is a small, two-story hexagonal pavilion built around 1873 by the order of King Gojong when Geoncheonggung residence was built to the north of the Hyangwonjeong site within Gyeongbokgung.

The pavilion was constructed on an artificial island of a lake named Hyangwonji (Hangul: 향원지; Hanja: 香遠池), and a bridge named Chwihyanggyo (Hangul: 취향교; Hanja: 醉香橋) connects it to the palace grounds. The name Hyangwonjeong loosely translates as "Pavilion of Far-Reaching Fragrance," while Chwihyanggyo translates as "Bridge Intoxicated with Fragrance. 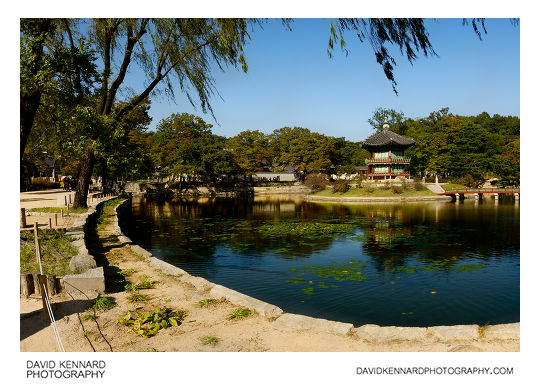 We walked north up the western side of the lake, and then visited Geoncheonggung (건청궁), a palace within a palace. From Wikipedia:

Geoncheonggung (Hangul: 건청궁; Hanja: 乾淸宮), also known as Geoncheonggung Residence, was a private royal residence built by King Gojong within the palace grounds of Gyeongbokgung in 1873.

King Gojong resided in Geoncheonggung from 1888 and the residence was continuously expanded, but Empress Myeongseong, the wife of King Gojong, was brutally assassinated by the Japanese agents on October 8, 1895 at the residence. Her body was raped and cut, and was burned and buried near the residence.

Haunted by the experiences of the incident, the king left the palace on January, 1896, and never returned to Geoncheonggung Residence. Demolished completely by the Japanese government in 1909, the residence was accurately reconstructed to its former design and open to the public in 2007.

This shot is a dragon head sculpture at one end of a roof ridge: 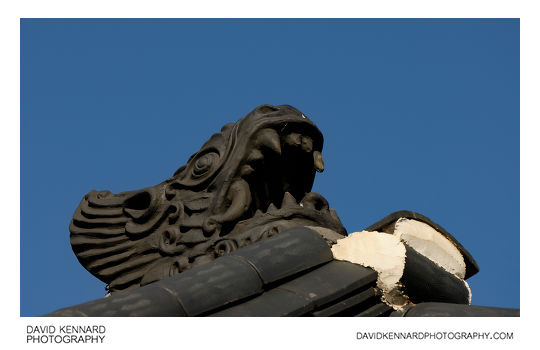 Corner of a roof gable in Geoncheonggung: 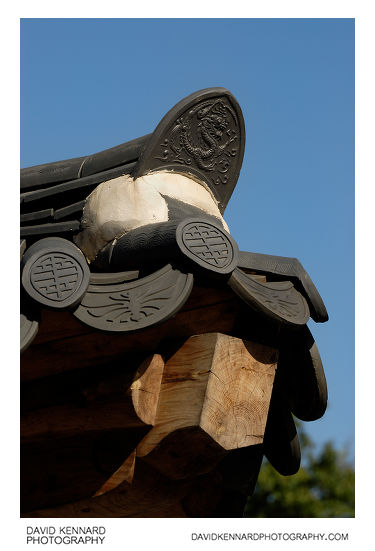 And a close up of the corner end tile, embossed with a dragon image: 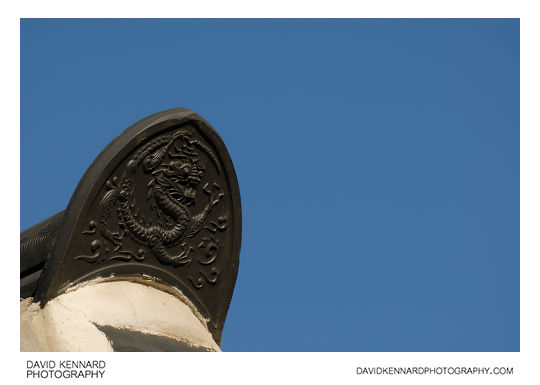 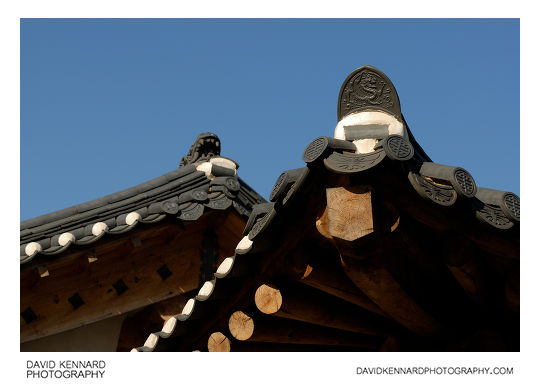 As you can see, the buildings in Geoncheonggung are quite different to the others in Gyeongbokgung, with the wood being left unpainted. 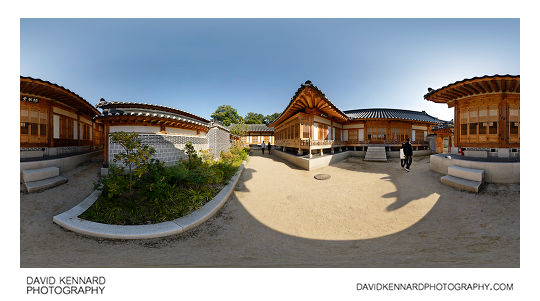 One of the problems I've had with writing descriptions for the photos of Gyeongbokgung is trying to work out what different buildings are. Even in cases like the image above, where the buildings have names written on tablets above doors, I find it very hard to decipher the brush strokes making up the chinese characters of their names. Often when I found out what is written on the name plate in Hanja (the chinese script system used in Korea before Hangeul was made the main writing system, and still used for names), the characters would be quite different in the number of strokes and where the strokes are placed/join from what the calligraphy on the name plate looked like. This is a problem because you need to know the number of strokes and place them relatively correctly to be able to write them on the computer and have the computer recognise it as the correct character.

For example, if you look at this name plate for Nokgeumdang (from this Korean blog), and compare it to the typed Hanja for Nokgemdang, which is 綠琴堂.

I have spent (literally) hundreds of hours so far just researching the descriptions for the photos from my first two full days in Korea. I think in future I would try to make sure that I:

Tags: Chwihyanggyo bridge, Dragon, Geoncheonggung, Gyeongbokgung Palace, Hyangwonjeong pavilion, Hyangwonji lake, Jongno-gu, Korea, Sculpture, Seoul
Posted in Photos | No Comments »
This post: Korea day 3 pt. 12 – Gyeongbokgung Palace
Last updated 2010/05/05 by Dave Kennard
You can follow any responses to this entry through the RSS 2.0 feed.
You can leave a response, or trackback from your own site.