I found a nice area of grass with quite a few dandelions flowering in it. I thought this would make a good subject for the UV photograph, since dandelion flowers appear darker under UV light than they do under visible light.

For photographing flowers in UV I nearly always use flash. This ensures a fast exposure. Without flash I need a longer exposure, which can result in the flower blurring if it is blowing in the wind.

For a landscape photograph, flash is out of the question. There is no way you could light up a whole landscape with flash. Unfortunately it was also windy when I took these photos, but you have to work with what you've got. 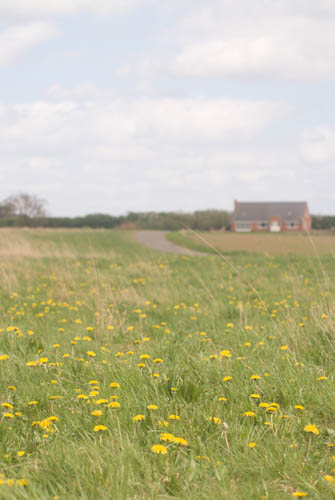 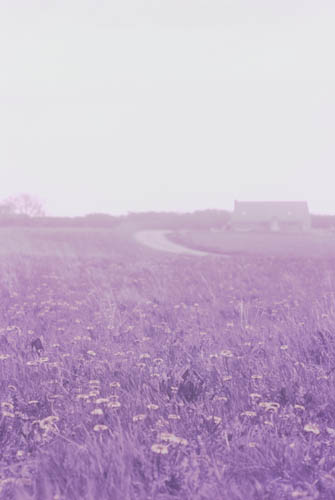 The first thing you'll probably notice is that the sky is completely blown out in the Ultraviolet photo. Taking a photo that is exposed to get some detail in the sky in UV results in the rest of the image being very underexposed. And there is not much contrast between the clouds and sky to see anyway. 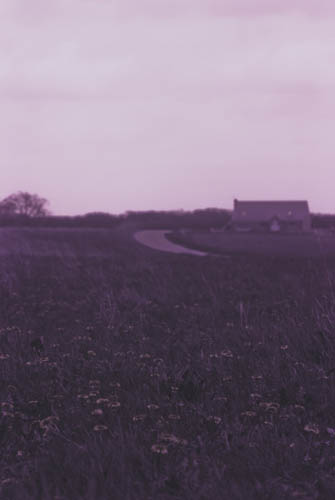 I also took an infrared photo as well. The dark areas amongst the dandelions are flowers that have finished flowering and have closed up. 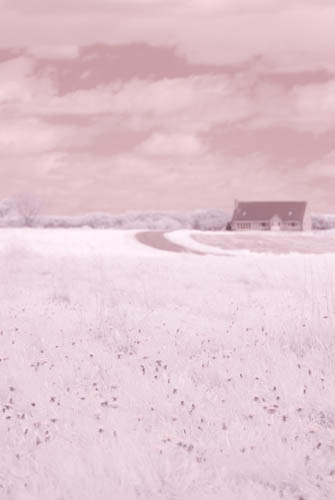 Back at home I then combined these three images into a single image. To do this I add all the images to a single Photoshop document. I hide the top layer, and set the middle layer to 50% transparency. Then I use the move tool to align it with the bottom layer. When aligned I put the opacity back to 100%.

Then I repeat the same process with the top layer to align that as well.

After doing this I switch the view of the new document to RGB and copy the image, then paste it back my other document that contains the UV, IR, and visible light images.

Because it was a windy day, and I wasn't working very quickly when taking the photos, the clouds had moved quite a lot between the visible light photo and the infrared light photo. This created strange colour artifacts in the sky of the combined image due to the differences in cloud positions. 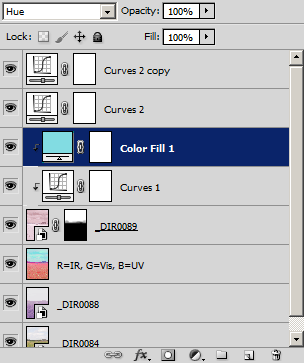 I added some curves to boost contrast and colour as well. The final image is below: 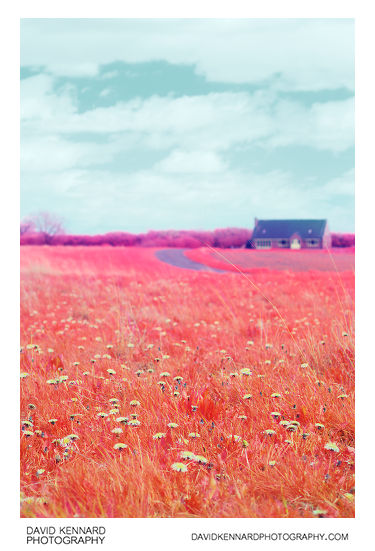 After doing this, I wondered what effect the ultraviolet image was actually having on the final image. So I created another new RGB image. This time I used the visible light channel for both the green and blue channels, and infrared for the red channel. 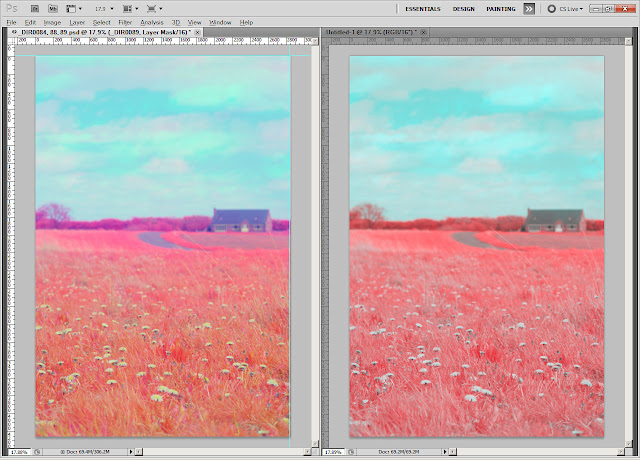 The Dandelions are white / neutral rather than yellow, and the hedge in the distance is red rather than purple. But the grass is still red and the sky is cyan.

So, you can produce an image in the same style with just a visible light an infrared light image.

Further on in my walk I came across another scene I thought would make for a nice photo. The only problem was, I really wanted a reasonably wide angle to get the shot I could see. The only wide angle lens I have that I can use with the IS Pro is the Nikkor 18-70 mm.

I couldn't use this lens though because my UV filter is too small (would cause really bad vignetting). The Baader U filter is 49 mm, while the filter size of the 18-70 mm lens is 67 mm. This makes me wonder if a micro four thirds camera would make a good UV camera. They have small lenses, and presumably small filter sizes.

Anyway, I had my Nikkor 50 mm lens with me, so I figured that was at least wider than then my 80 mm EL-Nikkor I used for the first shot. Even with the 50 mm lens I had to stand in weeds at the corner of the road and the view was tighter than I would have liked. (The IS Pro is a 1.5x crop camera, so the 35 mm equivalent focal length was 75 mm).

I discovered that this lens (Nikon 50mm f/1.4 D) has a strong UV hotspot. It doesn't seem to have an IR hotspot though. 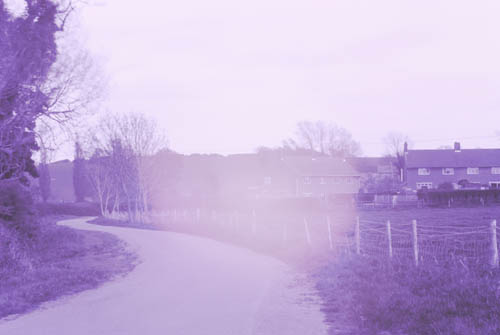 When processing this image, I applied heavy negative exposure compensation to darken the image. Then I applied very strong vignetting correction to brighten the edges of the image back up. Then I also used an adjustment brush to paint a bit more negative exposure compensation over the hot spot. The result isn't perfect, but is quite a bit better than without the adjustments. 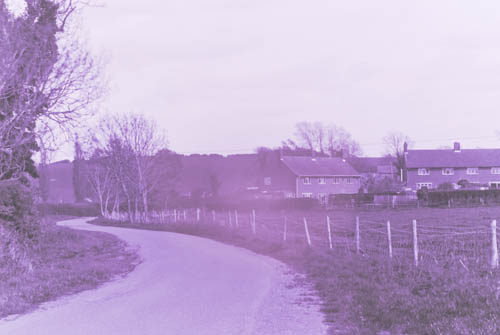 With this image I created the multispectral image, then used the IR image (with red and blue channels swapped) above in multiply blend mode. This adds contrast. I adjusted the curves as well. So you can still see strange colour artifacts in the sky from the difference in the cloud positions between the IR and visible light images (the sky is blown out in the UV image and so doesn't make any difference). 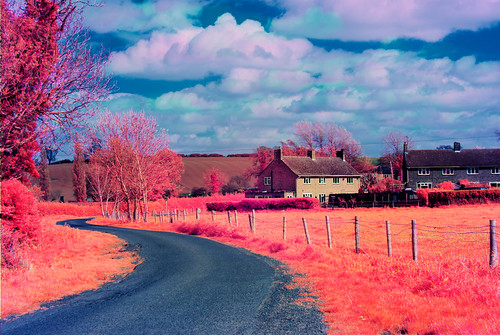 There are also lots of colour artifacts, especially near the edges of the image, due to mis-alignment of the images. (This has to do with camera movement, trees blowing in the wind etc, and difference in focus between IR, UV, and visible light). But these are quite small, so probably won't be visible in the web size image. They look a bit like really bad CA or an anaglyph image when viewed close up. 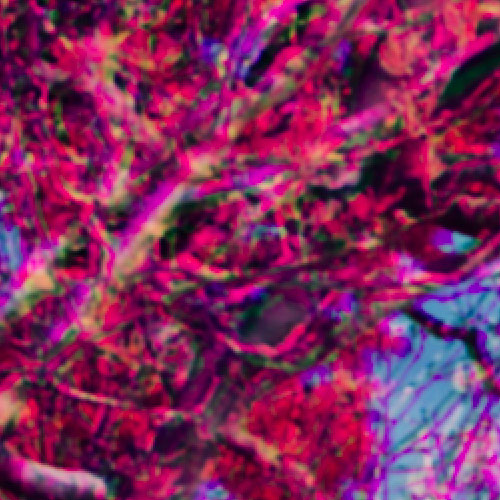 I think the IR image works well on its own for this last image. 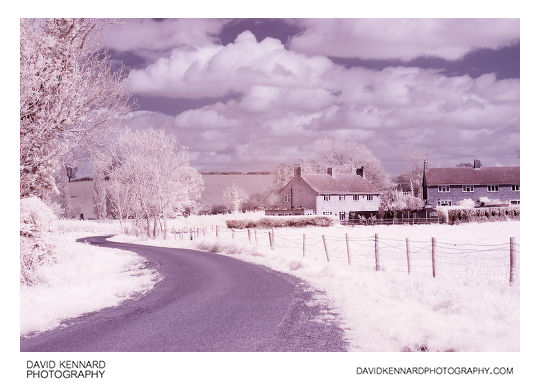 Tags: Fuji IS Pro, Infrared Photography, Multispectral photography, UV Photography
Posted in Photos | 4 Comments »
This post: UV & Multispectral landscape photography
Last updated 2013/05/15 by Dave Kennard
You can follow any responses to this entry through the RSS 2.0 feed.
You can leave a response, or trackback from your own site.