With true macro photography, it is often necessary to use flash, especially when photographing moving subjects like insects.

However, getting nice light from flash without harsh highlights isn't easy, so it's important to diffuse the flash to soften the highlights as much as possible. In April SteB designed some new diffusers for the Canon MT-24EX Macro Twin Flash (which I use) that have a concave design. He described them and posted some comparison shots on the Juza Nature Photography Forum: Concave Flash Diffuser Test.

Also mentioned on that thread is a 'light tent' diffuser, which seemed to produce excellent results as well. Although I was happy with my current diffusers for the MT-24EX when I used them last year, this year they didn't seem to be working very well (not sure how that could happen though). So I decided to try making the concave diffusers and light tent diffuser to see how well they compared to my current MT-24EX diffusers.

So after purchasing the needed materials, I set about making the diffusers. For the concave diffusers I used the caps of a Dove Invisible Dry Stick deodorant and a Boots Roll-on deodorant. For the light tent I used Vellum paper and a drink bottle. 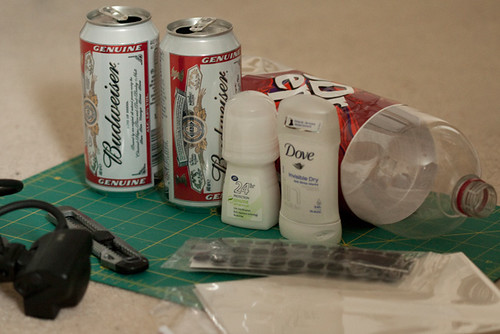 After making the diffusers, I needed to try and find a suitable subject to test them on, like a shiny beetle. While I was able to find various beetles, I wasn't able to find any that would stay still and allow me to compare the concave diffusers and light tent against my old diffusers.

However, a few days ago, I managed to find a 14-spotted ladybird (Propylea quatuordecimpunctata) who was quite co-operative. My tests weren't exactly scientific - I shot handheld so the angle varies between shots, and near the end of the tests the ladybird decided to move about a bit, but I think it still gives a good comparison between the different diffusers for the MT-24EX that I tested.

When testing I tried to equalize the lighting of the image, using the MT-24EX in manual mode, and adjusting the flash power as necessary. Unfortunately the MT-24EX only allows adjusting the flash power in full stops when in manual mode, and so for the Home-made mk. II diffuser I applied -0.65 exposure compensation when converting from RAW to try and equalize it with the other images. All the other images have had -0.35 exposure compensation applied in RAW conversion.

For the tests only one flash head was fired, with the flash head being in the 12 o'clock position. For the concave diffusers, they were additionally mounted on a Kaiser adjustable flash shoe to elevate them more above the subject. The images were converted using Adobe Camera Raw 5.6 with default settings except for the exposure compensation, and the tone curve, which was changed to a straight diagonal instead of the normal 'medium contrast' surve.

So here are the different MT-24EX diffusers I tested: 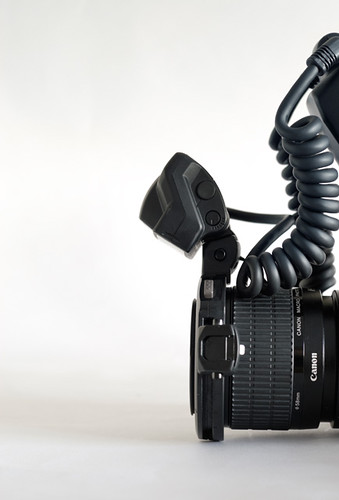 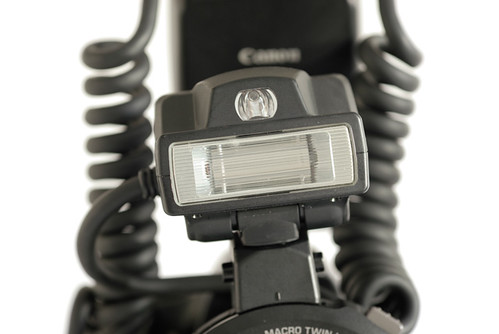 Well, not a lot to say about the bare flash really. The bare flash doesn't stick out from the front of the camera much. Sometimes it is only possible to get a shot using the bare flash as diffusers can stick out too much and make it so you can't get a subject in focus when shooting at high magnification against something like a wall or pavement. That's about the only good point of using the MT-24EX without diffusers. 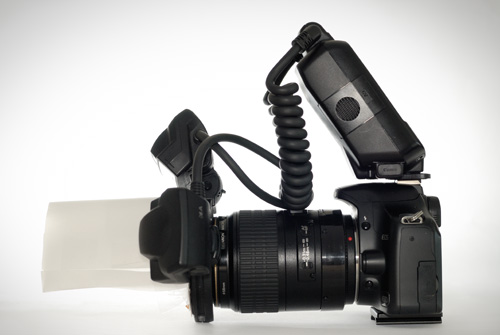 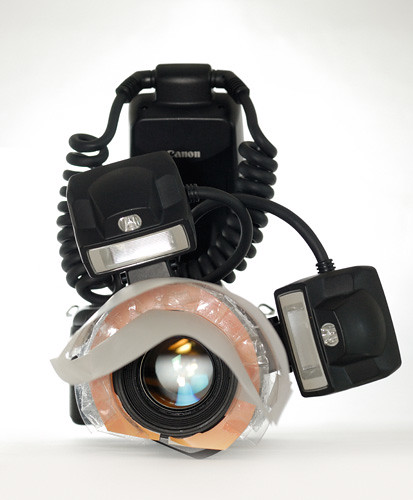 The light tent diffuser is two pieces of Vellum paper kept about 20mm apart, and mounted on the end of the MT-24EX flash ring that attaches to the end of the lens. The diffuser is large enough so that the flash heads can be positioned 90° apart while still both shooting through the diffuser.

The main problem with the diffuser when using it with the MT-24EX and MP-E lens is that because it sticks out quite far, it can knock against the plant that the insect you're trying to photograph is on, and scare the insect off or move it out of focus. In some cases e.g. shooting against a wall, it is not possible to use the light tent diffuser at all because it sticks out too far.

Another problem with the light tent diffuser is that it can easily get crushed and messed up when kept in your camera bag. 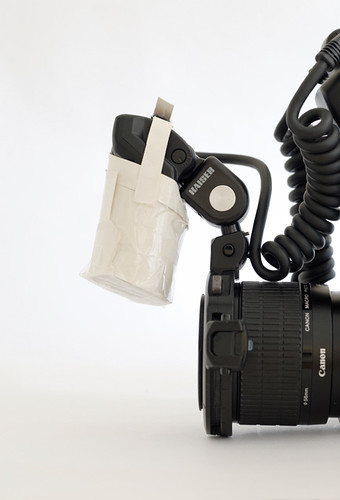 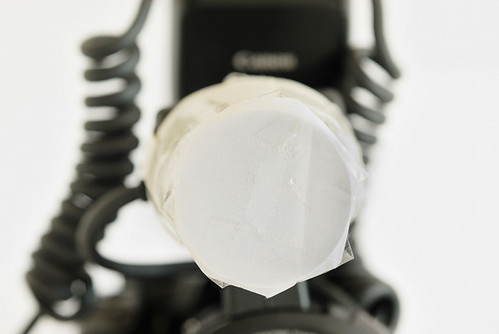 The Boots Concave diffuser is made from white card and a Boots roll on deodorant cap, positioned with the rounded end of the cap up against the flash head. The diffuser is fronted with a piece of Vellum paper.

The flash head with diffuser attached was mounted on a Kaiser Adjustable Flash Shoe to elevate it above the subject.

The long length of the diffuser means that the end is positioned relatively close to the subject, making for a larger apparent light size (and so better diffusion). But the large size means it is also more likely to knock against the plant the insect you're trying to photograph is on. 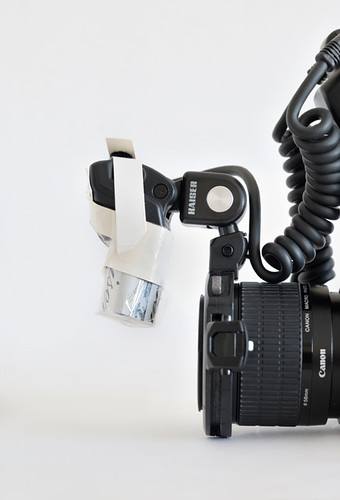 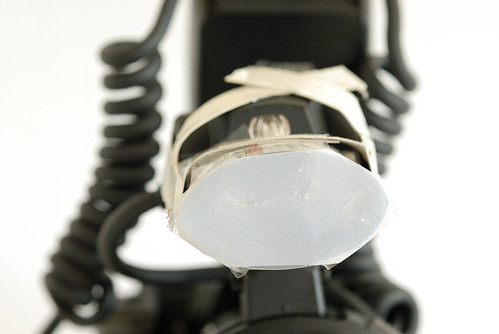 This diffuser was made from a Dove Invisible Dry stick deodorant cap, a drinks can, and some card. The deodorant cap is positioned inside the diffuser so that the rounded end is against the MT-24EX's flash head. It is fronted with a piece of Vellum paper.

The flash head was mounted on a Kaiser Adjustable Flash Shoe to elevate it above the subject. 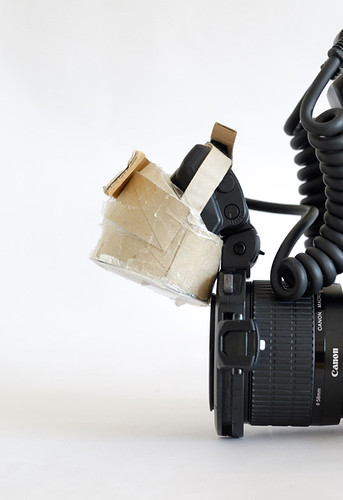 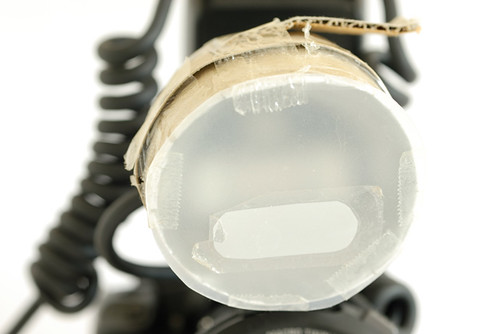 This is my large main diffuser for the MT-24EX that I used most of last year. This diffuser is made with foil coated toilet roll with a round opening, fronted with a piece cut from a YongNuo External Flash Diffuser, and a smaller piece of Lee 216 White diffusion.

The diffuser is designed with a longer top than bottom, so as to force more light down onto the subject. The round shape of the diffuser is intended to create a more natural looking rounded highlight than the rectangular shape of a bare flash head. 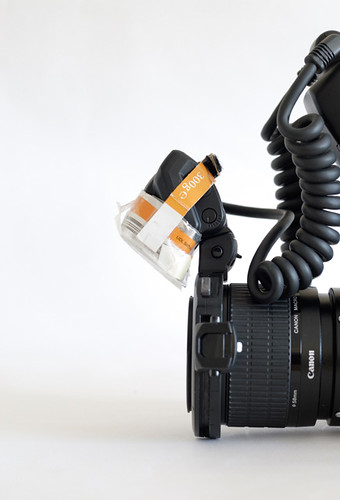 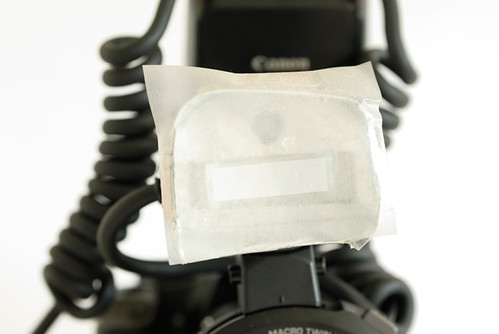 This small diffuser is made from card and covered inside with aluminium foil. It is fronted with Lee 253 Hampshire Frost and a smaller piece of Lee 216 White diffusion, designed to diffuse the 'hot-spot' of the flash. The bottom of the diffuser has a downwards lip to ensure good flash coverage at the closest focus distance of Canon's MP-E Macro lens.

And so here are the test results with each diffuser setup: 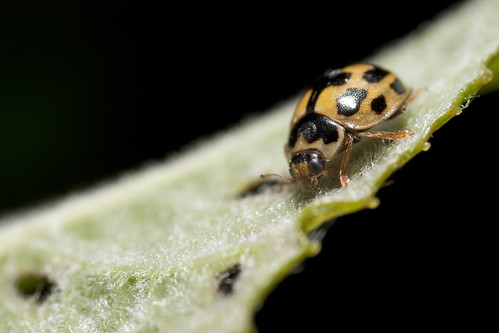 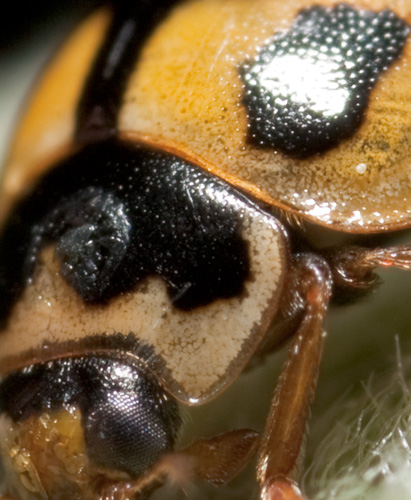 Although they do a good job of lighting the image, the bare flash head(s) of the MT-24EX produce harsh highlights and a large blown out area with no details. 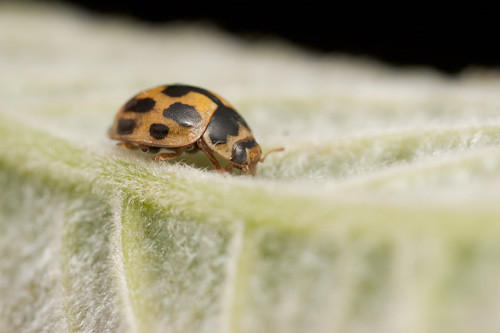 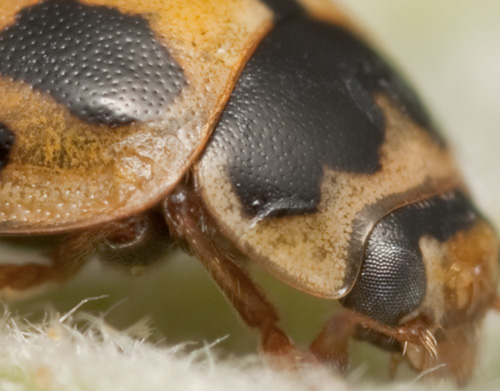 Probably the best diffuser I tested, the light tent diffuser produces nice even highlights, with no loss of detail. It does have a stop of light loss compared to the bare flash though. The image is relatively low contrast, but this can be fixed easily by applying a contrasty tone curve. 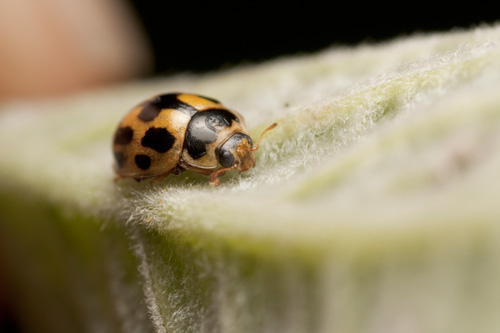 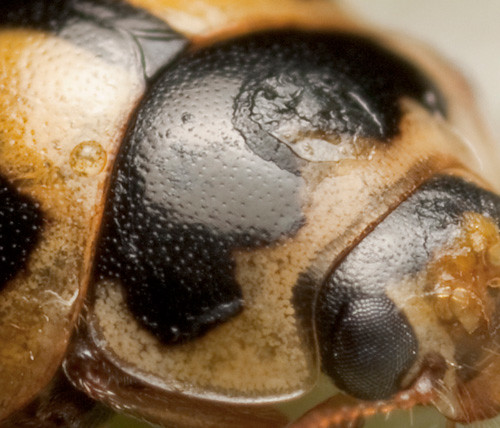 Not quite as good as the Light tent diffuser, nevertheless the Concave diffuser using the Boots roll-on deodorant cap does a very good job of diffusing the MT-24EX flash, with virtually no loss of detail and no loss of light compared to the bare flash. 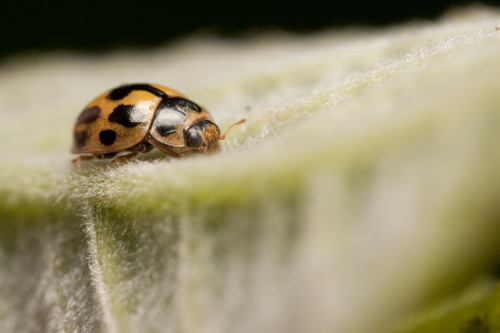 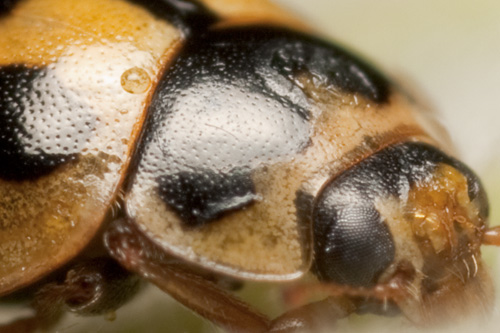 Very close result to the Boots Concave diffuser. Due to the Dove deodorant cap being relatively opaque, a stop of light is lost compared to the bare flash. 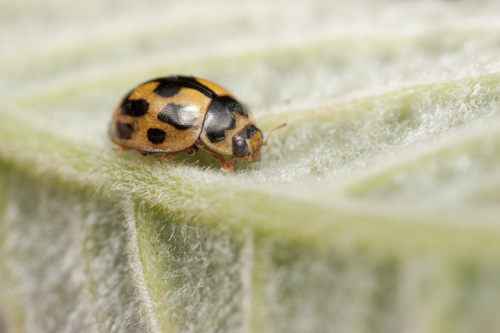 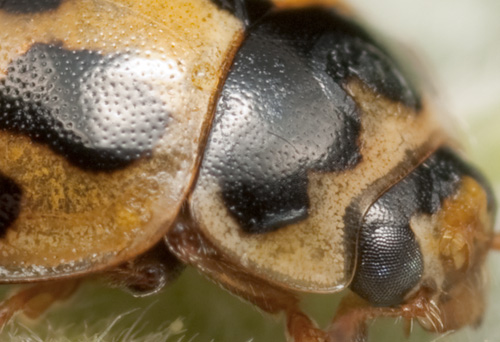 Quite a good result, but there is a small hotspot where some detail is being lost. Because the design of this diffuser channels the light down onto the subject and the diffusion material is quite transparent, we actually gain 1/3 stop light compared to the bare flash. 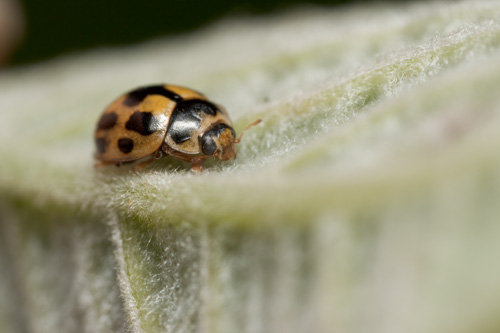 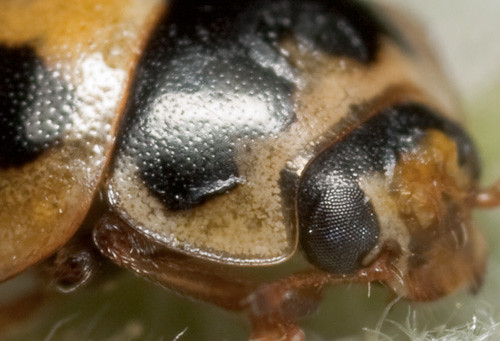 Diffusion is much better than the bare flash, but not very good compared to the other diffusers.

Tags: Canon MP-E 65mm f/2.8 1-5x Macro, Canon MT-24EX Macro Twin Flash, Diffusion
Posted in Macro & Close-up, Photography Tutorials | 2 Comments »
This post: MT-24EX Macro Flash Diffusers comparison
Last updated 2011/12/27 by Dave Kennard
You can follow any responses to this entry through the RSS 2.0 feed.
You can leave a response, or trackback from your own site.