When you get into the Korean Folk Village, quite near the entrance there is a large number of eartheware jars. At the time we were there, they were also drying chili peppers on mats. 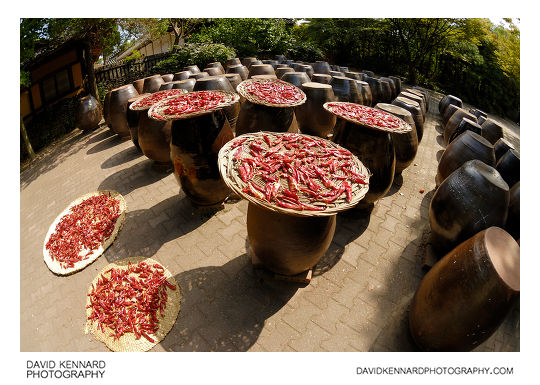 The Koreans like their spicy food, and the peppers would probably be made into gochujang paste. The paste would then be fermented in the earthenware pots. Kimchi and doenjang (soy bean paste) would also be fermented in these large jars. The large jars are known as Onggi, and they have a number of properties that make them suitable for fermenting and storing food. For more info see the wikipedia article: https://en.wikipedia.org/wiki/Onggi

Unfortunately for the above photo I forgot to bracket my shot, and so some of the mat and the highlights on the chilis are blown out and overexposed.

A bit further along, and there are two standing stones and a large mound of stones, all covered in small bits of white paper. 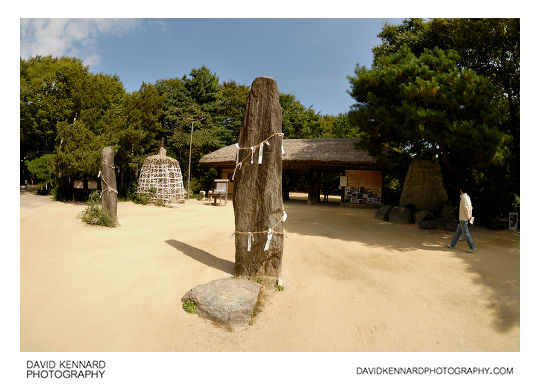 The bits of white paper are buddhist prayers that people write and then tie onto the string wrapped round the stones.

Below we have some of the tools that Korean farmer's used to use. Unfortunately I didn't have the ISO on my camera set high enough, which resulted in a long shutter speed and blurry photo. 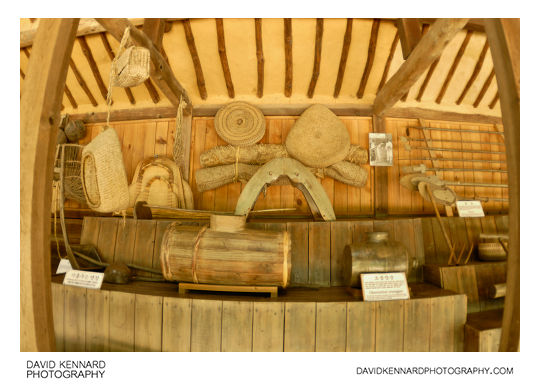 Of interest in the above photo is the small tank to the bottom left, which is an ojum changun. This website explains what an ojum changgun is:

Farmers also collect liquid fertilizer in either a round pitcher (ojum tok) or in a "rice bale"-shaped ojum changgun, with a small mouth affixed to its side. The latter is similar to, but larger than, the liquor container called sul changgun.

This next photo, I had a hard job working out what it is of. Although I took a photo of a sign explaining the area, the sign was in Korean. I don't know Korean, and Google Translate is pretty rubbish at tranlating Korean to English. As far as I could work out, it is an excavation of an old Korean building that was made at the nearby city of Dongtan New Town.

The description on the placard in Korean was:

Google translates this to:

Which doesn't make much sense, and I'm pretty sure Gyeonggi Province isn't located on Mars. 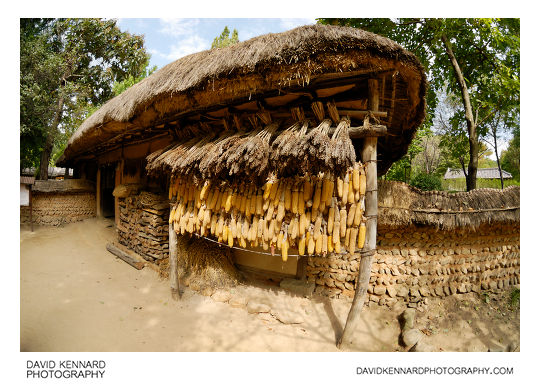 The house is actually a small complex of different buildings, as you can see from this pano that I took inside: Next we went to look at the lake and flat stone bridge.

Tags: Gyeonggi-do, Joseon, Korea, Korean Folk Village
Posted in Photos | No Comments »
This post: Korea day 4 pt. 2 – Korean Folk Village
Last updated 2011/02/10 by Dave Kennard
You can follow any responses to this entry through the RSS 2.0 feed.
You can leave a response, or trackback from your own site.